Technion - Israel Institute of Technology > About

The Technion – Israel Institute of Technology was founded in 1912 in Haifa and is the oldest university in Israel and the Middle East. The university offers degrees in science and engineering, and related fields such as architecture, medicine, industrial management and education.

Technion is noted as a global pioneer in multidisciplinary research into fields including energy, nanotechnology and life science. It has 18 academic departments and 52 research centers and over 13,000 students. Since its founding, it has awarded over 95,000 degrees and its graduates are cited to have brought the unique skills and penchant for innovation which helped conceive and consolidate the modern State of Israel. Technion’s over 610 faculty members include three Nobel Laureates.

In 2011, a successful  bid by a consortium of Cornell University and Technion led to the present estabishment of the Jacobs Technion-Cornell Innovation Institute (JTCII) in New York City. This is the first time any Israeli university has moved into establishing a center of global advanced research in the United States, and the new institute breaks new ground in the promise of global collaboration in advanced research. In 2013, this was followed by another 1st, with the decision to set up a collaborative institute of technology in China in the form of the Technion Guangdong Institute of Technology’ (TGIT).

Technion City generally refers to the 1.2 square kilometer site located on the forested slopes of Mount Carmel. The campus comprises over 300 buildings, occupied by thousands of people every day. Recreational activities on the main campus include an olympic swimming pool and sports center. Films and live performances by leading Israeli artists take place on a regular basis. Technion City includes a substantive network of dormitory villages offering individual and family accommodation to students and faculty.

The Technion has two additional campuses. Its historic building in midtown Haifa now houses the Israel National Museum of Science, Technology and Space. The Rappaport Faculty of Medicine is located next to the sea in the neighborhood of Bat Galim, adjacent to Rambam Hospital, the largest medical center in Northern Israel. 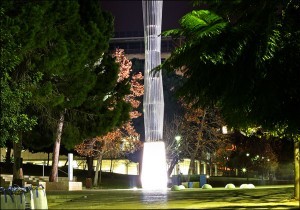