This is the highest award given by the Technion in recognition of a lifetime’s work dedicated to the Technion, and for contributing to the advancement of humanity, to the welfare of the Jewish people, and to the State of Israel. The Medal has only ever been awarded to 16 outstanding individuals

Technion President Professor Uri Sivan yesterday presented the Technion Medal to Technion graduates Yehuda and Zohar Zisapel. The Zisapel brothers are among the Technion’s biggest supporters and have particularly supported the Andrew and Erna Viterbi Faculty of Electrical and Computer Engineering, from which they both graduated.

They were awarded the Technion Medal for being “two of the pillars of Startup Nation and outstanding role models among generations of Technion alumni. For their generous and devoted support of the Technion and their alma mater, the Andrew and Erna Viterbi Faculty of Electrical and Computer Engineering. For their educational, social, and philanthropic activities, focused on cultivating young people from the periphery and promoting excellence in Israeli education. For their vision and endeavors laying the foundations for training the utmost engineers and researchers in the Israeli high-tech industry, which requires supreme human capital to ensure its continued prosperity.”

Technion President Professor Uri Sivan presented the Medal to Yehuda and Zohar Zisapel on the opening evening of the Board of Governors meeting, in the presence of guests including Technion Governors; the Mayor of Haifa, Dr. Einat Kalisch-Rotem; Technion management; members of the Technion Council; Nobel Laureates in Chemistry, Distinguished Professors Aaron Ciechanover and Dan Shechtman; deans, and other leaders from Israeli industry. Prof. Sivan thanked Yehuda and Zohar for their significant contribution to the Technion over the years and noted that: “they embody in their personalities the true spirit of the Technion, combining diligence, innovation, entrepreneurship, and excellence with deep social commitment. Their vision and commitment to Israeli society are reflected in their educational and social activities and make them a source of pride for us and an inspirational model for all Technion graduates.”

“It is an honor for us to receive the Technion Medal and I thank you in both my name and in Zohar’s name,” said Yehuda Zisapel. “I began my studies at the Technion in 1961 and graduated in 1966, even before the term ‘Israeli high-tech’ was coined. Later, I initiated educational programs that address the needs of Israeli high-tech and at the same time promote students from the periphery and reduce social disparities. Together with Zohar, I established the Nanotechnology Center at the Technion, which is named after our parents, Sara and Moshe Zisapel, and soon we will inaugurate a new building in the Faculty of Electrical and Computer Engineering. The Israeli economy suffers from a severe shortage of engineers and technological manpower, and we believe that the new faculty building will assist the Technion in its mission to increase the number of faculty, research and teaching areas, and train more young engineers for the high-tech industry in Israel.”

Dean of the Viterbi Faculty of Electrical and Computer Engineering, Professor Idit Keidar said, “Yehuda and Zohar are two of the most prominent graduates in the history of our faculty. Their extensive activities have provided significant reinforcement to the technological and entrepreneurial ecosystem of the State of Israel and have enabled young people from the periphery to improve their starting point for technological studies and meaningful employment.”

Yehuda and Zohar Zisapel both completed a bachelor’s and master’s degree at the Technion and an MBA in Business Administration at Tel Aviv University. In the 1970s, Yehuda established the company Bynet to market products in the field of data communications. At that time, Zohar worked in electronics R&D as part of a special unit in the Ministry of Defense, even receiving the Israel Defense Award for some of his projects.

In 1981, the brothers joined up to form RAD Data Communications, an export-oriented company that successfully competed with giant companies abroad. Following on from RAD, the brothers established additional start-ups, soon becoming Israel’s first serial entrepreneurs. The authors of “The Evolution of a New Industry” – Drori, Ellis, and Shapira – estimate that through the RAD Group and its spinoffs, the Zisapel brothers have established some 200 startups.

The Technion Medal is the most prestigious honorary degree given by the Technion for a lifetime’s work dedicated to the university. To date, it has been awarded to just 16 people in recognition of their contribution to the advancement of humanity, the welfare of the Jewish people and the State of Israel, and who, through their support of the Technion, have strengthened the scientific-technological infrastructure of Israel. Recipients of the award include Uzia Galil, former Technion President, Maj. Gen. (res.) Amos Horev; former President of the Supreme Court of Israel and Israel Prize Laureate for Law Moshe Landau; and Dr. Irwin Jacobs and Dr. Andrew Viterbi, co-founders of Qualcomm. The silver engraving on the medal depicts the Technion and the city of Haifa. It was designed by Studio Sadowski and was chosen by Professor Zehev Tadmor during his tenure as president of the Technion (1990-1998). 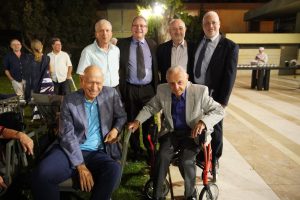