Technion - Israel Institute of Technology > Archive > From Tehran to Haifa, from Selegiline to Azilect
Medicine

Prof. Emeritus Moussa Youdim is the recipient of the Israel Prize in Life Sciences for 2022

Professor Emeritus Moussa Youdim of the Rappaport Faculty of Medicine at the Technion – Israel Institute of Technology is the recipient of the 2022 Israel Prize for Life Sciences. The Prize Committee noted that the prize was awarded to Prof. Youdim “for his pioneering, groundbreaking scientific achievements in the field of neuropharmacology. He has placed generations of undergraduates and graduates, many of whom hold key positions, in Israeli academia and in the biotechnology industry. His publications have received wide international acclaim and have won him many awards.”

Technion President Professor Uri Sivan said: “It is my honor to congratulate Professor Moussa Youdim on being awarded the Israel Prize for Life Sciences in recognition of his transformative contributions to science and medicine. The applicative and far-reaching nature of his achievements make him a member of an elite group of scientists privileged to see their research applied to benefit humankind. Prof. Youdim’s brilliant work has brought about a dramatic change in the understanding of neurodegenerative diseases and literally transformed the quality of life of Parkinson’s patients the world over.”

The President added “This is the third Israel Prize awarded this year to Technion researchers, a record for us, and it makes us so proud to see the Technion recognized for its important contributions to Israel and the world.”

Prof. Youdim was born in Tehran, Iran to a family with 5 children. The synagogue in the Jewish Quarter of Tehran belonged to his family and they ran all the community services relating to religion. The family was scholarly, passing on knowledge and giving advice to members of the community; hence their surname “Youdim (from the Hebrew word for knowledge).” 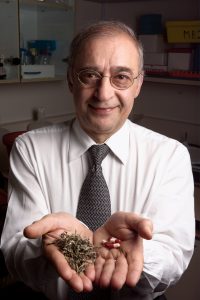 In 1972, he first heard about selegiline – a drug developed by Hungarian Holocaust survivor Joseph Knoll – whom he later visited in Budapest to collect a sample. In 1975, Prof. Youdim visited Israel, where he heard from his friend, Professor Raphael Meshulam, that the Technion Rappaport Faculty of Medicine was looking for a pharmacologist to establish and head a pharmacology department. Prof. Youdim did not know that a faculty of medicine even existed at the Technion, but he responded positively to the request of the faculty’s first dean, Professor David Erlik, and took up the position. In 1977, he immigrated to Israel with the decision to continue his selegiline research here.

In the Faculty of Medicine, Prof. Youdim and his colleague Professor John Finberg began developing the Parkinson’s drug together with Teva. By 1981, they knew they had an effective drug to treat Parkinson’s, but it wasn’t until 2006 that the drug Azilect® (Rasagiline) was approved by the FDA for treating Parkinson’s patients. A chronic and steadily disabling disease, Parkinson’s is afflicting younger populations as its average onset age continues to drops. It is now known that “Azilect” is effective in treating various stages of Parkinson’s disease, both as a single drug and in combination with the drug L-dopa. Azilect was selected by the NIH, the American National Institute of Health, as a major research topic in the study of neurodegenerative diseases and is the first drug that not only eases the symptoms of the disease but actually slows down their progression, especially when given in the early stages of development.

For decades, Prof. Youdim managed the Eve Topf Center for the Study of Neurodegenerative Diseases at the Rappaport Faculty of Medicine, as well as the U.S. National Parkinson Foundation Centers of Excellence for Neurodegenerative Diseases Research. He has published about 800 articles on various topics related to the brain, brain diseases, and the nervous system. In recognition of his work, Prof. Youdim has twice won the Hershel Rich Prize from the Technion as well as the Henry Taub Prize. He also received the EMET Prize for Brain Science and close to 50 other important international awards, and now the Israel Prize.