Two Technion professors will receive the prestigious Israel Prize in May 2022: Prof. Emeritus Joshua Zak of the Faculty of Physics will be awarded the 2022 Israel Prize for Physics and Chemistry Research. Known for the Zak Transform and the Zak Phase, Prof. Zak is awarded for his contribution to the understanding of condensed matter physics. Prof. Emeritus Yoram Palti of the Ruth and Bruce Rappaport Faculty of Medicine will receive the 2022 Israel Prize in the Field of Entrepreneurship and Technological Innovation. Prof. Palti developed groundbreaking cancer treatments that fight malignant brain tumors using electric pulses in a non-invasive manner.

The prizes were recently announced by Israel’s Minister of Educationת Dr. Yifat Shasha-Biton. 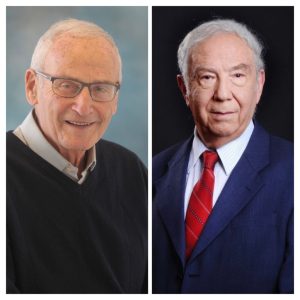 His scientific contributions serve, and will continue to serve, in gaining an understanding of the chemistry and physics of material

According to the Israel Prize Committee, Prof. Zak will be awarded the prize for “the development of mathematical tools such as the ‘Zak Transform’ and the ‘Zak Phase’ for the study of quantum phenomena in crystalline solids. These tools allow for the prediction of materials with unique properties to build electronic devices.” The Committee further emphasized that “…his scientific contributions serve, and will continue to serve, in gaining an understanding of the chemistry and physics of material.”

Technion President Professor Uri Sivan commented: “We are honored and exceptionally proud to congratulate Prof. Joshua Zak on being awarded the Israel Prize, and of this important recognition of his contribution to science. Prof. Zak’s research has led to breakthroughs in an understanding of fundamental phenomena that are presented at the forefront of research into quantum mechanics, while contributing greatly to practical engineering applications. Prof. Zak is a member of the generation of giants that founded the Department of Physics at the Technion, laying the foundations for theoretical physics in Israel. This is the second Israel Prize awarded to Technion researchers within a week, and we are literally bursting with pride.”

Joshua Zak, 93, was born in Vilna in 1929. At the age of 12, he and his family were sent to the ghetto, and later, he was deported to forced labor camps and a concentration camp, during which time he lost both parents. As an adolescent, Zak was forced to join the Death March to the west and was released by and immediately recruited to the Red Army – all before he had reached the age of 16. Following his discharge in 1948 he returned to Vilna and began to attend high school, graduating with honors despite having missed many years of schooling due to the war and his military service. When the Korean War broke out, he was again recruited to the Red Army, but was immediately discharged thanks to his brother, Ben-Zion, who persuaded the authorities to permit Joshua to attend university.

He completed his studies in Physics with distinction at Vilnius University in 1955, while simultaneously earning the title of Lithuanian kayak champion. In the same year, he was accepted to further studies in Leningrad and began studying there, but in 1957 was presented with the opportunity to immigrate to Israel, an opportunity he refused to pass up. Within a short time, he was accepted by the Technion, where he completed his doctoral studies under the supervision of Technion Professor Nathan Rosen, who was Albert Einstein’s student and assistant, and Professor Yoel Racah of the Hebrew University of Jerusalem. In 1960, Zak received his D.Sc., spent some time at the Massachusetts Institute of Technology (MIT), and then returned to the Technion, where he began studying in the Department of Physics. Ten years later, he founded, and headed, the Solid State Institute at the Technion.

Professor Emeritus Joseph Avron, staff member at the Technion’s Department of Physics, who studied for his doctorate under Prof. Zak, said, “Prof. Zak’s story is one of the meteoric rise of a boy who was almost completely unschooled, and it was only thanks to his phenomenal talent that in just a couple of years he succeeded in catching up, completing the entire curriculum imparted to children by the educational system over a 12-year period”.

Prof. Zak has many achievements in physics to his credit, two of which are named after him: the Zak Transform, which is presently used in signal processing, and the Zak Phase – a unique 1D crystal phase, which he described in an article in Physical Review Letters in 1989. This prediction has been verified in numerous recent experiments and is widely cited.

As mentioned, this is the second Israel Prize awarded to Technion researchers within a week. Last week, the Committee announced that the 2022 Israel Prize for Entrepreneurship and Technological Innovation had been awarded to Novocure founder Professor Emeritus Yoram Palti of the Rappaport Faculty of Medicine at the Technion. Novocure has developed an innovative technology for the treatment of cancer, which is currently applied in some 250 medical centers worldwide.

Professor Emeritus Yoram Palti of the Technion’s Rappaport Faculty of Medicine is the winner of this year’s Israel Prize in the Field of Entrepreneurship and Technological Innovation.

The Israel Prize committee, explained its decision: “Prof. Yoram Palti developed a groundbreaking method for electrical treatment of several types of cancer. The treatment is non-invasive and highly selective. His personal story is an inspiration, since this type of breakthrough requires thinking outside of the box and a deep conviction, requiring Prof. Palti to challenge and change existing approaches in this field.” The committee added that, “Prof. Palti is working to expand the use of this technology in order to treat additional types of cancer.” 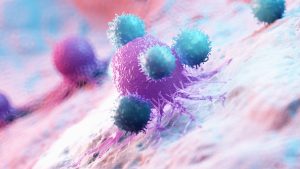 Technion President Professor Uri Sivan said: “We are proud and absolutely delighted by this important recognition and the prestigious prize awarded to Prof. Palti, who not only developed a new technology, but a groundbreaking new approach to the treatment of cancer – an approach that does not involve chemotherapy or other drugs. Prof. Palti’s work is an excellent example of the integration of engineering and medicine – integration that is among the Technion’s most distinctive hallmarks. Prof. Palti is an outstanding model of the rare ability to translate science into applications that are beneficial to people by combining profound research with an entrepreneurial spirit. Congratulations and well done!”

Prof. Palti was born in Haifa in 1937. As a child, he moved to Tiberias, and later to the U.S. When his family returned to Israel, they settled in Jerusalem, where he completed his schooling at the Beit HaKerem High School (now called Hebrew University High School). In 1955, Yoram Palti began studying at the Hebrew University-Hadassah Medical School in Jerusalem. At the army’s request, he took a break from his studies to conduct a research project, and then completed a combined M.D. and Ph.D. degree in Medicine. His thesis focused on a subject that would become his life’s work: the effect of electric fields on live tissue.

He was awarded a post-doctoral fellowship from the National Institutes of Health in the United States, and conducted his post-doctoral research at the University of Maryland in Baltimore. Within one year, he was appointed to the university’s faculty. In 1969, he returned to the Hebrew University, but two years later, was asked to help establish the Technion’s Medical School. Since then, he has linked his fate to that of the Rappaport Faculty of Medicine at the Technion.

Alongside his original research work and management positions at the Faculty of Medicine and at the Rappaport Research Institute, Prof. Palti dedicated himself to translating his innovative research to the clinical field. As a result, he became a serial entrepreneurial – founding a succession of companies, including Carmel Biosensors (monitoring glucose among diabetes patients), EchoSense (diagnosing heart disease), O2Cure (respiratory assistance and artificial lungs), and BetaVive (treatment for diabetes).

The highlight of Prof. Palti’s research and entrepreneurial activities is NovoCure, the company that he founded in 2000, which developed an innovative treatment for cancer patients. The treatment is based on special electric fields (Tumor Treating Fields) that attack the cancerous cells without harming surrounding healthy cells, and therefore do not produce side effects or other risks. Clinical trials began in 2004, and their success led to FDA approval for NovoCure’s technology for the treatment of three types of cancer. Later, the technology received CE approval (the European equivalent of the FDA) for treating all types of solid cancer. Treatments for six additional types of cancer, including pancreatic, liver, ovarian, and lung cancer, are currently at various stages of clinical trials. To date, approximately 20,000 patients have been treated with NovoCure’s technology in around 250 medical centers around the world. The company’s CEO is Asaf Danziger and its Executive Chairperson is Bill Doyle.