Are you a morning lark or a night owl?

In both cases, it may have something to do with your gut bacteria. This was the finding of joint research carried out by scientists from the University of Haifa and the Technion, which shows that there is hope for change for people whose sleep habits are a cause of suffering

The study was conducted in collaboration between researchers and a number of research groups at the University of Haifa and the Technion: Assoc. Prof. Eran Tauber Head of the Biological Clock Lab in the Department of Evolutionary and Environmental Biology at the University of Haifa and his lab manager Dr Bettina Fishman, Prof. Tamar Shochat and research student Liel Stelmach Lask of the Cheryl Spencer Department of Nursing at the University of Haifa, and Dr. Naama Geva-Zatorsky, Head of the Microbiome Research Lab of the Rappaport Faculty of Medicine at the Technion, and her Ph.D. student Shaqed Carasso. The challenge was to examine differences in gut microbiome composition between early risers and night people.

“This is the first time that a connection has been found between people’s gut microbiome, eating behavior and sleep patterns,” says Prof. Tauber. “These discoveries are likely to pave the way to change these patterns by altering one’s diet.” 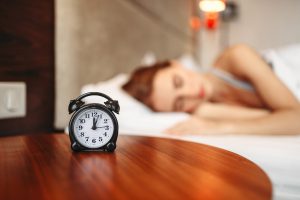 According to Prof. Shochat, “The current practice is to divide people into three different “chronotypes” (chronotype is the body’s natural disposition to be awake or asleep at certain times), which, according to earlier studies, were already known to be genetically different: “larks”, who are morning people who get up early and are at their best in the morning; “owls” – night people who go to bed late and have a hard time functioning in the morning; and the intermediate group, which is made up of most of the population. Studies conducted in recent years found significant differences between the different chronotypes – physiological, cognitive and in the structure of their personality. It’s worth noting that a number of studies concerning the genetic mechanisms that influence circadian rhythm – our “body clock” – were at the core of the Nobel Prize in Medicine for 2017.”

Initial evidence collected as part of a study on flies in Prof. Tauber’s lab, supports the idea that changes in gut microbiome composition may affect chronotype identity. Since the genes related to circadian rhythm are identical among humans and flies, a joint research proposal between the Tauber, Shochat and Geva-Zatorsky groups was suggested to examine the existence of a similar relationship in humans, which culminated in the research published in the FASEB Journal.

The researchers made a pitch to the general public and recruited volunteers from across the country, who sent in stool samples and reported on their sleep patterns and eating behaviors. The researchers characterized the composition of the gut flora of 91 volunteers belonging to the three chronotypes (morning people, night people and intermediate types) through DNA sequencing of the samples.

The research results point to differences between the microbiome of “larks” and “owls”; among “larks”, the researchers found a higher percentage of the bacterial genus Alistipes, whereas among “owls”, the bacteria belonging to the Lachnospira genus were higher –bacteria that produce butyrate, a short-chain fatty acid that is a source of signals related to sleep and wakefulness.

When the researchers reviewed the daily diets of the subjects through questionnaires, they again found significant differences between morning larks and night owls: morning people eat far more fruits and vegetables, drink mainly water and do not eat complex carbohydrates, whereas night people eat a high-fat diet, lots of meat, fewer fruits, and drink beverages that contain large amounts of sugar. 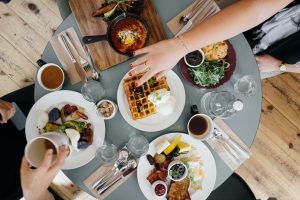 “Studies at our lab and other labs active in this sphere, show that our gut microbiome composition and our health are closely connected,” says Dr. Naama Geva-Zatorsky and Shaqed Carasso. “Moreover, our eating behaviors, diet, and habits can affect our gut microbiome composition. The present research focuses on healthy people and paves the way to characterizing not only how bacteria vary between different chronotypes, but also to an understanding of how gut bacteria are affected by our habits and how they might affect us. It is important to note that causality was not yet proven, and this shall be the focus of our next study”

Indeed, according to the researchers, it is still too early to determine whether the difference in microbiome composition influences the attribution to the different chronotypes or is influenced by it, or if the causality at play here is more complex. That said, the fact that for the first time a connection of this kind has been found opens up opportunities for an examination of the subject. As mentioned, the fact that “owls” are characterized by a large number of bacteria that produce butyrate, an amino acid that is connected to the sleep/wake rhythm, supports the assumption that there is a connection between sleep/wake patterns and gut flora composition. Meanwhile, initial evidence collected in Prof. Tauber’s lab on the research on flies reinforces the idea that changes in microbiome composition could affect chronotype identity.

“The customary daily routine in Western society today often makes things tough for night owls,” says Prof. Tauber. “They go to bed late and have to get up relatively early to go about their daily duties, so they often suffer from a lack of sleep. We also know that many night people suffer from problems like depression, diabetes and obesity. We hope that if we can change the bacterial populations that inhabit our digestive tract, for example, by making changes in our diet and eating habits, we might be able to influence the sleep patterns of owls and improve their quality of life.”