Air drums, dancing “spiders,” and robodogs were among many cool student projects presented recently at the Henry and Marilyn Taub Faculty of Computer Science.

In a project fair held at the end of the spring semester, students graduating from the Technion’s Faculty of Computer Science presented their work. The faculty values independent work as part of the graduates’ training process, and such projects give students an opportunity to integrate what they have learned.

The students presented various projects in the field of computer science, focused on the challenges they chose to tackle. Some created mobile apps for different uses; some developed programs to solve diverse problems; some delved into virtual reality; and others built devices, in the evolving field of Internet of Things (IoT). Multiple projects focusing on the Internet of Things were led by Itai Dabran and supervised by Tom Sofer, Michael Mendelson Mints, Vladimir Parakhin, Alon Binder, and others.

Here are some of the most intriguing projects presented.

Play drums without disturbing the neighbors

Almog Algranti, Nadav Abayov, and Yarden Wolf, created air drums: using computer vision algorithms, their app detects the drumsticks in the user’s hands, and plays music as if the user were seated at a drum set, recognizing both which drum is being struck, in what manner and with what force. “I play the piano, and recently got interested also in drums,” Algranti (filmed, below) explained. “This was an opportunity for me to create an ‘instrument’ that would let me practice without the financial investment in a drum set, and without disturbing the neighbors.”

Suad Mansour, Sereen Diab and Aseel Khateeb, turned nostalgic computer game Icy Tower into a sports app by attaching an exercise stepper. Now, the game character would only move so long as the player kept moving. If the player stopped, the character would fall, resulting in a game-over. Like any sports app, the project displays feedback about steps walked and calories burned, as well as the game’s leaderboard. “As children, we played this game, and it as a lot of fun,” the three explained, “but it’s not very healthy to spend a long time by the computer, moving nothing but the arrow keys.” 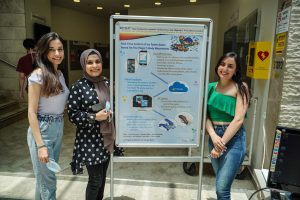 Eliezer Alter, Barel Cohen Adiv and Eliad Ben Haiem, who all three live in the campus dorms, decided to “smartify” their clothesline. Equipped with a water sensor, a light sensor, and a tarp, their clothesline now unrolls the tarp over the clothes if it rains, folds the tarp back when the sun comes out, and even sends reminders to do the laundry when the weather promises to be fine. 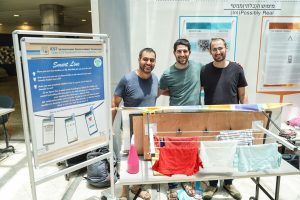 No (real) dog, no mess: meet the robodog!

Nadav Ashkenazi, Asaf Bialystok and Nathan Voldman constructed a dog that recognizes its owners, follows them around, and barks at strangers. Ethan Baron, Ron Klaz and Snir Green’s “spider” recognizes music and dances to the rhythm. Daniel Shkolnik, Omer Hemo and Mordechai Ben Harush created a queuing app for individual exercise machines at the gym. 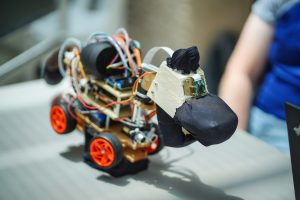 All in all, students created useful and fun projects, all demonstrating implementation of diverse skills. A considerable number of projects stood out for being purposely built to help the community. You can read about those here.