Technion - Israel Institute of Technology > Archive > Independent on the Ground

Technion Researchers have developed an innovative mapping system for blind pedestrians. The study was carried out by Achituv Cohen, a doctoral student in the Transportation and Geo-Information Engineering division of the Technion Faculty of Civil and Environmental Engineering under the supervision of Asst. Professor Sagi Dalyot. 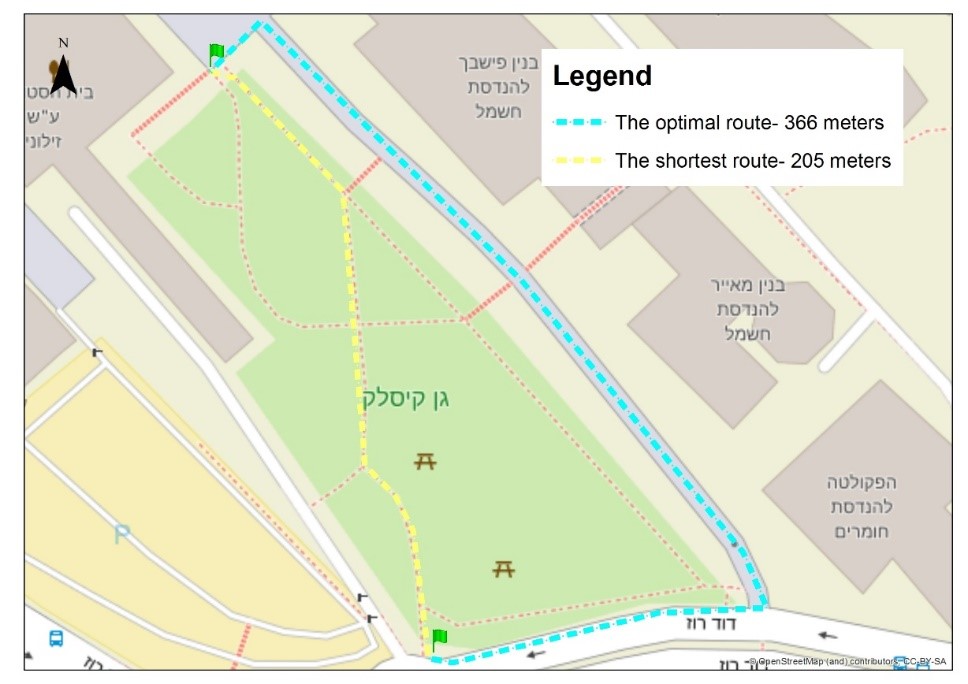 According to the World Health Organization, there are currently more than 40 million visually impaired people around the world. This population copes with many daily challenges, some of which are related to traveling within urban spaces. When walking, various environmental features pose danger: stairs, bicycles and cars, physical obstacles on the sidewalk, and more. These severely restrict mobility and independence, affecting the quality of life. There are existing technologies that improve visually impaired pedestrian mobility to some degree by indicating nearby road obstacles. However, those technologies lack significant information about the surrounding space.

The study, published in the journal Environment and Planning B: Urban Analytics and City Science, examined the possibility of using OpenStreetMap to map spatial data relevant to blind pedestrians while calculating optimized walking routes. OpenStreetMap is an open-source mapping infrastructure based on crowdsourcing of geographic data contributed by citizens all over the world. OpenStreetMap provides maximum flexibility in terms of inserting, editing, and analyzing. It also integrates accumulated mapping data and spatial information.

In his study, Achituv developed a route calculation software for generating walking routes adapted to the needs of blind pedestrians. The study included an in-depth investigation, observations, and interviews with orientation and mobility instructors, as well as with blind individuals. The fieldwork resulted in a clear definition of spatial criteria that best reflect aspects of mobility, accessibility, and safety, defined by four primary parameters: geometric complexity of the route; route type and what it is used for; route length, and; landmarks along the route. Other features were also integrated, such as accessibility of traffic signals.

The software weighs the environmental and semantic data that are important to the vision impaired, with an emphasis on safe, accessible, and navigable routes. These criteria enable qualitative and quantitative examination of the various available road segments between the starting point and the destination, determining the level of accessibility and safety, thus recommending the most optimized route. The developed software was tested by blind volunteers and an orientation and mobility guide in several locations. Not only were the routes recommended by the new software identical to the routes defined by an experienced guide, but the volunteers noted that, in most cases, the route chosen by the software was indeed more accessible and safer for walking than the routes calculated by existing commercial software, such as Google Maps.

These findings indicate that the software is an effective and useful tool, improving the lives of visually impaired individuals in terms of mobility, accessibility, and independence.

Click here for the paper in Environment and Planning B.