Technion FIRST in Dubai and AIPAC

In celebration of their winning a silver medal at last October’s Robotics Olympics in Dubai, the FIRST Israel team from Megiddo Regional High School has been invited to speak on the stage of the prestigious AIPAC Policy Conference in Washington, D.C. 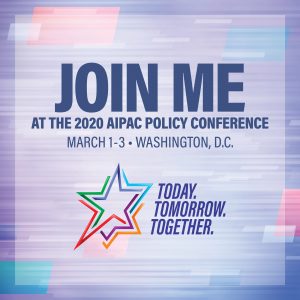 The Megiddo Team, which functions under the FIRST Israel organization led by the Technion-Israel Institute of Technology and Israel’s Education Ministry and Ministry of Science and Technology, went to Dubai last October to participate in the Global Challenge FIRST World Olympics. Following its impressive accomplishments during what was largely a secret trip, and earning a silver medal, the team members were invited to speak at AIPAC March 1-3, 2020 in Washington, D.C.

The teens who represented the organization and the State of Israel in Dubai will fly to the US on February 26 to take part in grand rehearsals before speaking on stage, presenting the robot they developed and sharing their special story.

The competition, which featured 119 delegations from 119 countries, was an important opportunity for positive exposure for the State of Israel in the technological and diplomatic aspects. The Israeli team participated in the international competition and qualified for the finals as head of the cluster of delegations competing together that included Italy, Uganda, and Australia. The Israeli team won the silver medal in the finals after completing the preliminary stage with the highest point ranking and being the only team with a perfect winning score of 9-0-0. The team also received a special award for giving exceptional help to other teams.

The eight teens are Noa Duman, Yuval Perry, and Ron Perry of Ramot Menashe; Itai Ziv of Merhavia; Omar Baram of Yokneam-Illit; Ido Levy and Gal Chapman of Ramat Hashofet; and Uzi Ben Yitzhak of Kibbutz Megiddo. Two mentors – Osnat Duman and Nissim Levy – and security staff accompanied the students to ensure their safety in Dubai. The team made the trip thanks to the assistance of the Megiddo Regional Council, the Mellanox Company, the Tama Group, and additional companies, as well as support from the Ministry for Foreign Affairs.

The delegations in Dubai came from all over the world and competed, using robots they alone developed, with a challenge simulating collection of garbage from oceans and protecting the environment. Points were given based on their ability to collect as many items as possible from the arena where the competition was held.

FIRST is an acronym for Inspiration and Recognition of Science and Technology. The U.S.-based, not-for-profit organization was established in 1989 by inventor and entrepreneur Dean Kamen to inspire the love of science and technology in children and youth. It uses a model of sporting robotics competitions where teams compete against each other in a challenge.

More than 570,000 children and teens participate in FIRST programs around the world. Sponsored by the Technion, FIRST Israel has been operating as a non-profit organization since 2005. It is headed by Major-General (res.) Avihu Ben-Nun. In Israel, 14,000 children and youth from kindergarten to 12th grade from all over the country and from all sectors participate in this activity.

“The achievements of the high school delegation from Megiddo to Dubai were a source of pride and respect for Israel FIRST and the entire State of Israel,” said Major-General (res.) Avihu Ben-Nun. “I am thrilled that our friends at AIPAC recognize the importance of the event, and we thank them for inviting them to the conference and supporting the team’s technological success. We also thank our partners at the Technion, the Education Ministry, the Science and Technology Ministry and the Megiddo Regional Council who have been of great assistance so that the pupils could participate in the Robotics Olympics in Dubai.

“The team’s travel to Dubai today marks the success of the FIRST Israel community, as we mark 15 years since establishing a branch in Israel that has taken upon itself, in collaboration with the Technion, to increase the motivation of the generation of the future to engage in science and technology, alongside the values ​​of helping others, partnership, professional courtesy and mutual responsibility. On behalf of FIRST Israel, I wish good luck to our representative on the AIPAC stage.”

Technion President Prof. Uri Sivan said: “FIRST is an important and wonderful program that expresses the Technion’s mission of encouraging science and engineering studies among children and youth. Moreover, it expresses the spirit of change that we are working to implement in teaching methods in the Technion. The stress is shifting from frontal teaching to learning based on projects; it will give students not only knowledge but also a broader systemic vision, including leadership and teamwork skills. The Technion has been a partner in the FIRST program from its inception and will continue to support it as an important and vital national program. We view FIRST students as our future students – leaders who will ensure the continued advancement of technology and research in Israel.”

Science and Technology Ofir Akunis added: “This excellent team made an unprecedented achievement in its ranking and qualities at the Robotics Olympics in Dubai. In fact, I had no doubt that they would have tremendous achievements, and so I told them at our meeting, on the eve of their leaving for the competition. They give us real national pride and are absolute proof of the importance of the government’s decision that I led since taking office – to finance these missions from the ministry’s budget. I wish the team members a good flight to Washington and am sure that they will represent us with honor on the AIPAC stage in the American capital as well.”

Education Minister Rafi Peretz concluded: “The wonderful achievement of our national robotics team brings tremendous pride for the education system and the entire State of Israel. In addition to its educational importance, a competition was also an important opportunity for Israel from the ground-breaking technological and diplomatic aspects. In light of the competition’s importance, I worked hard to obtain the security authorizations required for our pupils to participate in the prestigious competition. We will continue to work for the development of our children’s future and creating excellence so that Israel will continue to be a leading force in the global market. I welcome and salute the winning team. Your success is our success. Congratulations to you and the supporting personnel who accompanied you.”