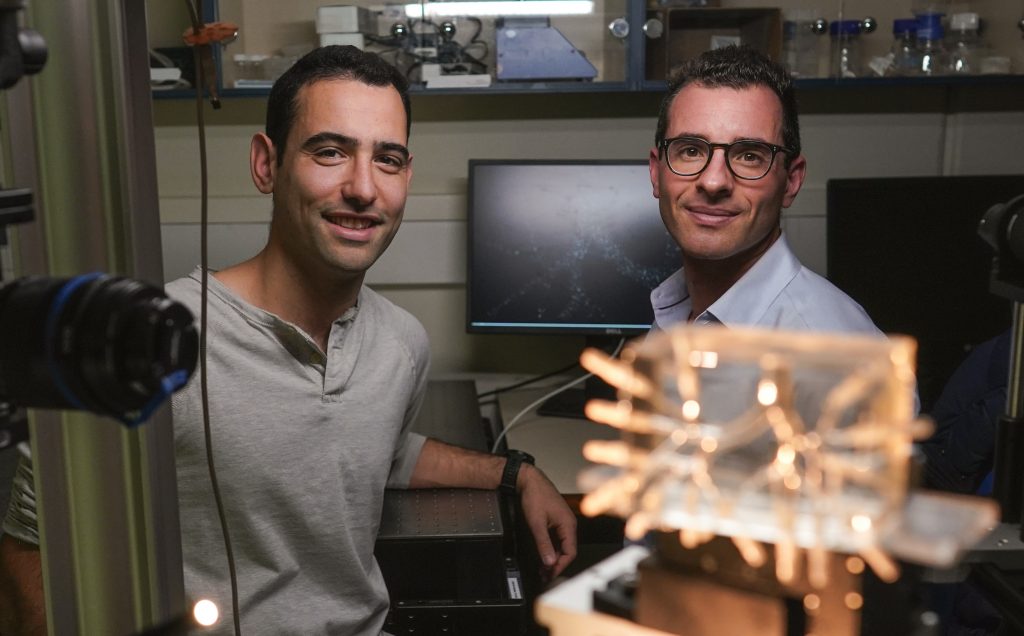 A new artificial model of premature infants will facilitate experiments that could reduce injury to infants on respirators. The study, published in the Journal of The Royal Society Interface was conducted by doctoral student Eliram Nof and Professor Josué Sznitman of the Technion Faculty of Biomedical Engineering, in collaboration with Professor Dan Waisman, director of the Newborn Unit at the Carmel Medical Center.

More than 10 percent of babies worldwide are born prematurely. Infants in general, and premature babies in particular, are limited in their function in various aspects since their organs have not been able to develop properly. One of these is the respiratory system, which reaches full function only late during fetal development. This is the reason why premature birth is often characterized by respiratory distress, in part due to the lack of a unique soapy substance (surfactant), that prevents the collapse of the lungs and facilitates breathing. 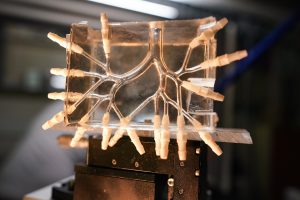 Fortunately, modern medicine is able to cope with this problem and save premature infants, mainly by providing an exterior surfactant that is delivered in conjunction with a ventilation machine – a breathing apparatus that pumps air into the baby’s respiratory tract through an orally inserted tube.

However, in its current form, the use of a respirator is not without problems. One of the possible side effects in premature infants using a ventilation machine is damage to the lung tissue. There is no standardization for choosing ventilator operating parameters like the percentage of oxygen in the infused air, the volume of air, the pressure, the rate, and more. Doctors do their best to make adjustments based on each infant’s condition and to minimize injury. Yet, many infants are injured during this process that is nevertheless vital to saving their lives.

This is where the unique model developed by Technion researchers comes into the picture. After prolonged research activity at the levels of mathematical modeling of respiratory airflows, Mr. Nof and Prof. Sznitman developed a physical silicone model that simulates – in 3D and in real size – the upper respiratory tract of a premature baby.

The researchers were surprised to discover a phenomenon not mentioned at all in the medical literature: an air jet at the exit of the tube inserted into the mouth of the baby.

“Until now, it was known that the tube could cause abrasive injury to the delicate tissue but the effects of the airflow were overlooked,” said Nof. “In the present study, we discovered for the first time, that due to its location inside the baby’s trachea, this jet exerts strong shear forces on the epithelial tissue – the layer of cells that covers the upper airways. These forces can cause damage, including inflammation, which poses a real risk to the premature infant.”

The researchers examined these findings in a silicon model and found that indeed, the jet exerts friction on the lung tissue that can cause significant damage. With further study, they intend to grow live biological cells onto the model and examine the effect of the jet on them.

These conclusions are in line with the overall trend in the premature department of the Rambam Health Care Campus – a trend to reduce invasiveness in treatment and to reduce the use of invasive respiration as much as possible.

According to Dr. Liron Borenstein, senior physician in the Department of Neonatology and Neonatal Intensive Care at the Rambam: “With advances in medicine, we are today able to treat younger premature infants and more complex illnesses. However, respiratory morbidity is still a significant factor in premature infant mortality and morbidity. The technology presented in this article – creating a model of a healthy, specific area and exploring the forces exerted on the tissue by an air jet created under invasive respiration – can advance us in understanding the mechanisms leading to the damages of ventilation that we want to prevent and in developing gentler breathing techniques that are appropriate for the premature infant population.”

Professor Josué Sznitman was born in France and raised in the United States and Switzerland. In the Summer of 2010, with a doctorate from ETH Zurich, he made aliyah to Israel and joined the faculty of the Technion. He has won numerous awards including the Young Researcher Award from the International Society for Aerosols in Medicine (ISAM) for a researcher under the age of 40. He currently heads the Biofluids Lab at the Faculty of Biomedical Engineering. Prof. Sznitman developed the first diagnostic tool that allows quantitative monitoring of the dynamics of inhaled particles in the respiratory system. This “acinus-on-chip” is relevant for both health risk assessment (infections, etc.) and for evaluation and planning of medication for the respiratory system.

Eliram Nof made aliyah from the United States at the age of 18 to enlist in the IDF. After completing his military service, he pursued bachelor’s and master’s degrees through a fast track at the Faculty of Mechanical Engineering at Ben Gurion University. His master’s work, under the guidance of Prof. Oren Sadot and Prof. Gabi Ben-Dor at the Shock Wave Research Laboratory, investigated the effects of supersonic flow in collaboration with the Ministry of Defense. In preparation for his Ph.D., Eliram decided to apply his background in fluid dynamics to problems in the medical world, thus the collaboration with Prof. Sznitman, who advises him on his doctoral degree.