An international research team solved the genome sequence and genome structure of the fatal sleep parasite Trypanosoma brucei.  The parasite is transmitted via African tsetse fly bites and causes fatal sleeping sickness. The discovery may lead to the development of new treatments for the disease 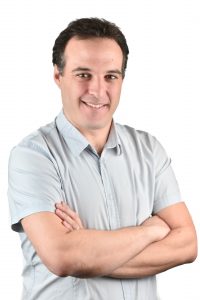 Using an innovative genome sequence assembly method developed by Dr. Noam Kaplan of the Technion’s Rappaport Faculty of Medicine, an international research group has deciphered the genetic code of the parasite that causes sleeping sickness in sub-Saharan Africa.

The journal Nature reports on the breakthrough in the understanding of the genome of the fatal parasite Trypanosoma brucei, which causes fatal “sleeping sickness” among humans. The researchers deciphered the sequence and 3D organization of the parasite’s genome. They suggest that this achievement may later assist in curbing the fatal disease, common mostly in the forests and water bodies of central Africa.

The international study was led by Prof. Nicolai Siegel of the University of Munich, and involved researchers from Germany, USA, UK and Israel.  Technion.

Trypanosoma brucei is transmitted to humans and other mammals via the tse-tse fly, which enables the parasite to proliferate in its salivary glands, and infects mammals while sucking their blood. The researchers hope that understanding the genome of this parasite will lead to the development of techniques to block its fatal activity.

The genome is the total genetic information of each organism.  It is a very complex sequence which may consist of billions of bases (DNA units); the last two decades have witnessed a major leap in the ability to decipher it. 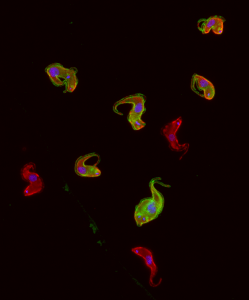 The parasite evades the immune system by switching to a new antigen. The red and green colors indicate the two different antigens present on individual parasites. The DNA is presented in blue. Kindly provided by Laura Muller

According to Dr. Kaplan, “It is very simple today to read millions of short DNA fragments, but very long fragments cannot be read. Therefore, the main challenge is to properly arrange the short segments, much like putting together a puzzle – a process known as genome assembly.”

Dr. Kaplan already addressed this challenge during his post-doctoral fellowship with Prof. Job Dekker at the University of Massachusetts. The technology he developed is based on an experiment in which the spatial proximity of DNA fragments is measured in live cells. In an article published in 2013 in Nature Biotechnology, he demonstrated that advanced computational analysis of these proximity patterns can be used to assemble an entire human genome.  “This method,” he explained, “bridged the ‘scale gaps’ in genome assembly and is applicable to any species.”

Since the development of this genome assembly new approach, a number of companies implementing this idea have been established, and recently, several major genomes of animals and plants have been solved, including the frog, mosquito, goat, quinoa, wheat and barley genomes. And now, it is the Trypanosoma brucei’s turn.

In the current study, the researchers discovered a unique relationship between the spatial organization of the genome and the mechanism that switches antigens – the protein recognized by the human immune system.  The antigenic switching mechanism enables Trypanosoma brucei to evade the immune system of affected individuals. The researchers suggest this discovery may enable future development of parasites that will protect at-risk populations.

Dr. Kaplan joined the Technion Faculty of Medicine in 2016 and established an interdisciplinary laboratory “since a combination of many disciplines, including biology, computing, mathematics, statistics, physics and chemistry, is needed to understand the genome.” The lab studies how the genome’s 3D organization is determined and how this organization affects genome function. Dr. Kaplan’s research team is also working on the next generation of genome assembly methods, which will assist in characterizing and understanding the genomic changes that occur in cancer and other diseases.

The current article in Nature and Dr. Kaplan’s 2013 publication in Nature Biotechnology, where he reports on the novel genomic scaffolding method based on spatial proximity.