In findings published this week in Developmental Cell, researchers in the Technion Faculty of Biology present an explanation for root capacity to adjust their growth in response to changes in the availability of minerals essential to plant nutrition. 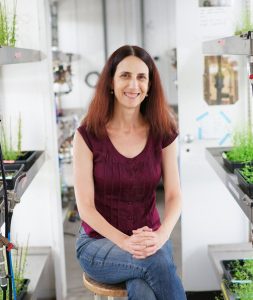 The research was led by Dr. Amar Pal Singh, a postdoctoral fellow in Professor Sigal Savaldi-Goldstein’s laboratory, and involved fellow lab members as well as collaborators from the lab of Professor Arnon Henn at the Technion and the ENS Lyon, France.

“Plants are critical to life on Earth and are fascinating organisms to study,” says Prof. Savaldi-Goldstein. “They differ from animals in several aspects. While animals can move and migrate to safer locations, toward water sources and the like, plants are fixed in place. In contrast to animals, plants generate new organs throughout their life and regulate their growth rate in accordance with environmental conditions – which is essential to their survival. During evolution, the plant kingdom developed various strategies to adapt to fluctuating environmental conditions. The root, for example, can accelerate or decelerate its growth and to form new side roots that emerge from it, depending on nutrient availability in the soil.”

Steroid hormones, called brassinosteroids, are critical for plant growth and development. The Technion researchers assessed the activity of brassinosteroids and the proteins they regulate, in the root of the Arabidopsis (a small flowering plant related to cabbage and mustard). They discovered that the proteins in the brassinosteroid pathway are also impacted by signals arising from the nutrient composition in the root environment.

The researchers demonstrated that the mineral composition in the plant growth media (that is, in laboratory conditions) can have contradictory impacts: iron deficiency in the plant environment increases the intensity of the brassinosteroid pathway and thus accelerates root growth, while phosphate deficiency in the environment, which leads to iron accumulation in the root, weakens the brassinosteroid pathway activity, thereby slowing root growth. 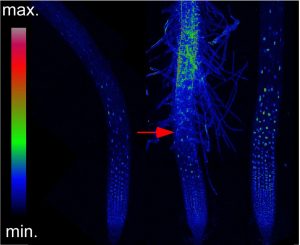 Img1 – The steroid hormone pathway is also regulated by nutrient availability. For example, this live imaging shows a transcription factor of the steroid pathway that is partitioned between the nucleus (shown as colored circles) where it is active and promotes growth, and outside the nucleus (as in the middle root, where cell elongation is arrested and as a result root hairs are closer to the root tip). This sub-cellular localization depends on the hormone levels, but also on the external levels of phosphate and iron. Arrow marks the region of cell elongation in the root, where this regulation occurs.

The researchers also identified the link between the plant and its environment in these processes – a protein called BKI1. They discovered that this protein – which is known to regulate the steroid pathway – is also affected by environmental conditions; iron deficiency reduces its expression levels, thereby accelerating root growth, while phosphate deficiency increases its expression, leading to slowed root growth. That is, BKI1 sits at an “intersection” between a pathway of an internal origin signal (hormone) and a pathway originating from the environment (nutrient availability).

The researchers also discovered a reverse effect: the intensity of the brassinosteroid pathway affects the amount of iron that is accumulated in the root, which serves as a feedback signal that likely ensures root growth in accordance with environmental conditions.

“We have essentially uncovered a mechanism that links the availability of these two nutrients – phosphate and iron – and the steroid pathway, which together adjust root growth”. Understanding the complexity of plant response to limited mineral availability might assist in the future to improve crop yield while reducing the need for fertilizers.”

From the very start of her research endeavors, Professor Savaldi-Goldstein has been focusing on plants as a great model to study biology. Her lab at the Faculty of Biology at the Technion seeks to understand developmental principles in plants. To this end, she studies the two sources influencing plant growth – namely, the signals coming from within the plant and those coming from its environment. Her work integrates different experimental tools such as live imaging, analysis of gene expression at a cellular level and developmental genetics techniques.