Described in Nature Communications, the technology is based on natural photosynthesis of photosynthetic bacteria 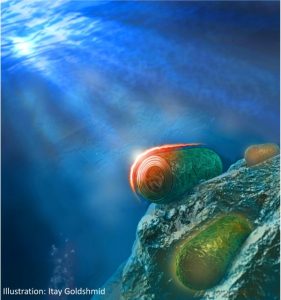 HAIFA, ISRAEL and NEW YORK (June 19, 2018) – A new technology developed at the Technion-Israel Institute of Technology enables energy harvesting from photosynthetic bacteria – cyanobacteria. Cyanobacteria belong to a family of bacteria common to lakes, seas and many other habitats. Throughout their evolution, the bacteria developed photosynthetic mechanisms that enable them to generate energy from sunlight. In addition, they also generate energy in the dark, via respiratory mechanisms, which relies on sugar degradation.

The importance of photosynthetic bacteria is quite significant, as they form a source of atmospheric oxygen and an essential source of organic material (e.g., sugar), which constitutes the first link in the food chain. Using a “natural solar antenna” (PBS), they absorb a broad range of sunlight intensities and wavelengths – between 400 and 700 nm – effectively exploiting this inexhaustible source of energy. The energy is channeled to chemical reaction centers, where water is broken down, while releasing a flow of hydrogen ions. The ions are then applied to generate chemical energy, which drives food production.

Published in Nature Communications, the study was conducted by three Technion faculty members: Professor Noam Adir from the Schulich Faculty of Chemistry, Professor Gadi Schuster from the Faculty of Biology and Professor Avner Rothschild, from the Faculty of Materials Science and Engineering.  The work involved collaboration between Dr. Gadiel Saper and Dr. Dan Kallmann and colleagues from Bochum, Germany and the Weizmann Institute of Science. The three Technion researchers have collaborated in the past, including in a project in which they generated energy from spinach leaves using sunlight (published in Nature Communications in 2016).

The energy-generating processes that developed in photosynthetic bacteria throughout evolution have come to be appreciated as they perform their function without the generation of pollution. For this reason, the past few years have witnessed growing interest in the possibility of generating energy and hydrogen from these bacteria. One of the breakthroughs of this study was the use of live bacteria, which can repair damaged photosynthesis-related proteins in real-time. In addition, energy harvesting is not expected to harm the bacteria.

The Technion researchers developed an energy-producing system that exploits both the photosynthesis and respiratory processes, allowing for energy harvesting during the day (photosynthesis) and at night (respiration).  The harvested energy was leveraged to generate electricity, which was then utilized to produce hydrogen gas, currently considered the fuel of the future, as hydrogen-motorized vehicles only emit water, without pollutants.

The system is based on radiation-driven generation of a photocurrent, which the researchers showed was highly stable and enabled continuous production of hydrogen. They believe that it can serve as a promising source of clean, environment-friendly energy that will not emit pollutants during production or use (hydrogen fuel).