In a festive ceremony, Technion inaugurated the ground station for the Adelis-SAMSON nanosatellite project

A ground station for satellite missions has been built at Technion for the Adelis-SAMSON project, to be launched into space at the end of 2018 by a Dutch company that specializes in launching nanosatellites, with the support of the Adelis Foundation and the Israeli Space Agency of the Ministry of Science and Technology. Following the launch, the nanosatellites will be monitored by Technion’s ground station, which will monitor the satellites’ activities and receive transmitted data. 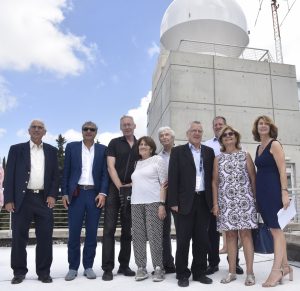 Mrs. Rebecca Boukhris, Director of the Adelis Foundation, said during the inauguration ceremony that, “At the end of 2014 we signed an agreement with Technion, and within one year NASA completed the agreement with the Israeli Space Agency. The Adelis-SAMSON project provides Technion and Israel with an opportunity to cross borders and initiate a new technological revolution, and we are proud to be among the pioneers of this project.”

Prof. Boaz Golany, Technion’s Vice President for External Relations and Resource Development, said that, “Israel is a small country with few resources, and it has no choice other than to rely on human capital – its most important resource. The only way to do this is by investing in higher education and academic research. Technion has pursued this goal by relentlessly striving to expand human knowledge, while seeking to solve the problems on Israel’s doorstep.”

The Adelis-SAMSON project was developed in recent years by a team of scientists headed by Prof. Pini Gurfil, director of the Asher Space Research Institute and a member of Technion’s Faculty of Aerospace Engineering, with the support of the Adelis Foundation and the Israeli Space Agency of the Ministry of Science and Technology. The project intends to prove that a swarm of satellites can orbit for one year in a controlled formation at an altitude of 600 km. The project will entail launching three nanosatellites into space that will operate autonomously, without human intervention. The satellites will receive signals from Earth and will calculate the location of the transmission’s source for the purpose of search and rescue operations, remote sensing and environmental monitoring. The size of each satellite will be 10x20x30 cm., approximately the size of a shoe box, and will weigh around 8 kg. The satellites will be fitted with measuring devices, antennas, computer systems, control systems and navigation devices. The software and algorithms that will operate the flight were developed in the Technion Distributed Space Systems Lab.

“The proximity between the satellites creates a complex technological challenge for monitoring them from Earth,” explains Prof. Gurfil. “The ground station will enable automatic shifting of the communication beam between the ground and the satellites by turning the antennas towards each of the satellites that pass over the station, and all this without human intervention. In the future, it will be possible to monitor a larger number of satellites at the same time.”