An Autonomous Car for Every Schoolchild: More than 1,000 Students Participate in the Technion Robotraffic Contest

Student Groups from around the world come to compete in Israel as the Technion celebrates nine years of the contest named for Nadav Shoham.

Hosted by the Technion’s Leumi Robotics Center led by Dr. Evgeny Korchnoy, the competition welcomed over 100 groups including more than 1,000 students and teachers from Israel, the US, Argentina, Mexico, Russia, and Ukraine. 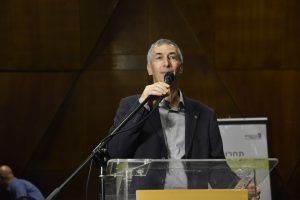 “Mobile robots are fun but more important is the fulfillment you get from building amazing things with your own two hands,” said Prof. Adam Schwartz, senior vice president of the Technion, in his opening remarks for the 9th Robotraffic competition. “This is where you’ll understand why it’s worth coming to study at the Technion”, added Prof. Schwartz. “You’ll find the answer inside the average robot: check the operating system and you’ll see it was created by a Technion computer science graduate, the mechanics were designed by a Technion mechanical engineering graduate, and the sensors were built by a physicist who studied here.”

The Nadav Shoham Robotraffic contest is a joint project of the Ministry of Education, the Technion’s Leumi Robotics Center, World ORT and Kadima Mada, and the World Zionist Organization, along with Ytek and Eytam Robotics. The competition strives to provide students with the knowledge and skills associated with safe driving in order to lower the number of young drivers involved in traffic accidents.

The students build robots that are in essence autonomous vehicles required to perform tasks on a simulated road. The most challenging part of the contest, aimed at high school students, involved elements of safe driving, advanced safety methods, speed, general road safety, driving laws, and control of the vehicle using SolidWorks. 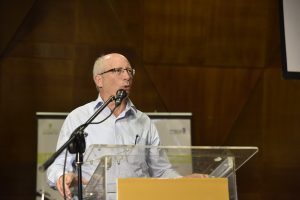 “I see here Technion students and graduates who participated in this competition when they were still in school,” said Prof. Moshe Shaham, head of the Technion Robotics Laboratory. “It’s likely that cab drivers will be out a job in the near future because the world is headed more and more in the direction of autonomous vehicles.”

Bian Kablan, former mayor of Beit Jann, said that the study of robotics has spread to all grade levels in his town, thanks to the Robotraffic competition. “We start robotics in kindergarten,” he explained. “It provides students with the tools to develop new mental tools that go beyond the particular subject area.”

Jonah Weinbaum, a junior at the Frankel Jewish Academy in Michigan, said that his team planned for the contest throughout the entire year, during which the teacher who had been coaching them left the school. He said that the contest itself was “a fascinating week. We visited Technion chemistry and robotics labs and the Microsoft offices in Haifa. We didn’t realize how huge the contest is – it was beyond anything we expected. We’re learning and improving. Next year we’ll come back to the Technion and do even better!”