SHANTOU, CHINA (December 19, 2017) – The Guangdong Technion-Israel Institute of Technology (GTIIT) was inaugurated in China. The project, which brings together Israeli spirit and Chinese strength, is the result of an historic partnership between the Li Ka Shing Foundation, the Guangdong Provincial Government, the Shantou Municipal Government and the Technion-Israel Institute of Technology. The ceremony was held on the GTIIT campus this morning, in the presence of Mr. Li Ka-shing, who conceived the idea, and Technion President Prof. Peretz Lavie; Shantou Mayor Zheng Jiange; Haifa, Israel Mayor Yona Yahav; Israeli Consul General to Guangzhou, Nadav Cohen; Israeli Consul General to Hong Kong, Ahuva Spieler; Chairman of the Planning and Budgeting Committee of the Israel Council for Higher Education, Prof. Yaffa Zilbershats; Nobel Laureate in Chemistry and Technion Distinguished Prof. Aaron Ciechanover; Technion Board of Governors Chairman Lawrence Jackier; representatives of the Chinese Government; and guests from around the world. 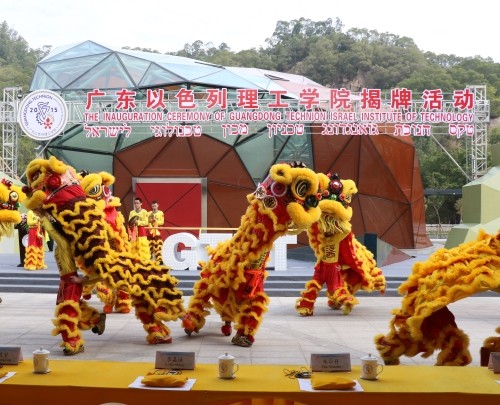 In his speech, Technion President Lavie pointed out the great similarity between Jewish tradition and Chinese culture: Jewish and Chinese cultures both have long histories of written tradition, emphasize ethics at the center of their traditions, and hold learning as a core value. President Lavie thanked philanthropist Mr. Li Ka-shing, whose profound vision, legendary generosity and deep devotion were instrumental in the realization of the project, and blessed the inauguration of GTIIT that took place during the Hanukah Holiday, with the Hebrew blessing: “Shehecheyanu, v’kiyimanu, v’higiyanu la’z’man ha’zeh” (Who has given us life, sustained us, and allowed us to reach this day. 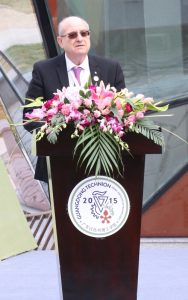 GTIIT was established with the support of the Governor of Guangdong Province, the Shantou Municipal Government, the Chinese Government and the Li Ka Shing Foundation (LKSF). It is intended to train an elite brand of scientists and engineers who will influence China and the world, primarily on issues concerning the environment. It will also promote cooperation between Shantou University and Technion. Such partnerships are already underway in the field of medical sciences.

The new university is headed by GTIIT Chancellor Li Jiange, who said, “China offers Technion a broad platform to realize its academic excellence. We in turn must learn from Technion and Israel as to what innovative thinking is.”

On behalf of Technion, GTIIT is led by Nobel Laureate in Chemistry and Technion Distinguished Prof. Aaron Ciechanover. Prof. Ciechanover said, “The opening of the Technion campus in China is a testament to the excellent relations between China and Israel and, no less important, to the great appreciation of the Chinese giant for Israel’s scientific and engineering achievements and to the education leading to them. It is important to remember that we also have something to learn from the Chinese – planning and carrying out large-scale projects, adhering to timetables and boundless industriousness. There is no doubt that all parties involved in the project will reap considerable benefits from it.” 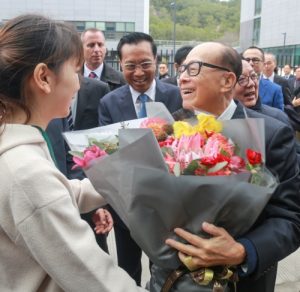 The inauguration of the campus takes place just two years after the groundbreaking ceremony for GTIIT, which was held in December 2015 before an audience of 5,000. At that ceremony, the ninth President of Israel Shimon Peres said: “The establishment of a Technion campus in China is one more proof that Israeli innovation is breaking down geographic borders. China is one of Israel’s major partners in technology and high-tech, and both countries have much to share with, and learn from, one another.”

Immediately following today’s inauguration ceremony, participants proceeded to the opening of a new exhibition that was created especially for the event. Dubbed, “Technion Wisdom – The Art of Science,” the exhibition presents 37 outstanding research and innovation achievements by Technion researchers and alumni. The exhibition curator, Anat Har-Gil, gave each of these developments an artistic interpretation that renders them accessible to the general public.

The events surrounding the inauguration include a scientific conference with the participation of researchers from Technion and Shantou University. Lectures on topics will include marine biology, coastal planning and medical science.

About Guangdong Technion-Israel Institute of Technology

Last year, the Chinese Ministry of Education granted accreditation to the Guangdong Technion-Israel Institute of Technology, which will “operate and promote advanced degree (Master’s and PhD) programs based on Technion’s extensive experience in this field. Master’s and PhD degrees will be issued by Technion.” The Guangdong Technion-Israel Institute of Technology will strive for economic growth and social development based on the areas where Technion excels, and in accordance with the environmental challenges faced by China.

Looking ahead, GTIIT will also include faculties in Science, Engineering and Life Sciences. In the years ahead, the Institute will grow physically and in the number of students and faculty, but in order to maintain the high level of instruction this growth will be accomplished gradually. In 2036, the student population is expected to grow to approximately 5,000, including some 1,000 graduate students. The Institute will grow accordingly, from its current area of 100,000 square meters to 400,000 square meters. 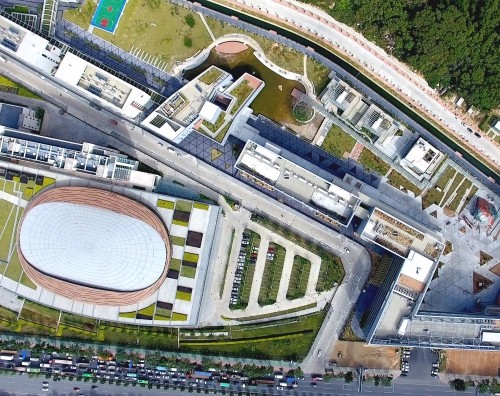