Algorithm That Changed the Face of Digital Communication Marks 50th Anniversary
Technion marked the jubilee of the Viterbi algorithm at a festive ceremony. The event was held during the TCE Conference, which focused on coding for storage and information systems 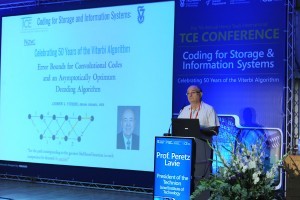 Technion marked the 50th anniversary of the Viterbi algorithm, which has changed the face of the digital information world in many different contexts, including voice transmission over phone calls, image and voice transmission in video calls, and Internet and cellular transmission. The algorithm was published by Prof. Andrew Viterbi in 1967, revolutionizing data decoding and optimal noise and interference filtering, and leading to the development of key communications technologies including Code Division Multiple Access (CDMA).

“I never set out to produce an algorithm which would receive the attention which it has,” wrote Prof. Viterbi to Prof. Ariel Orda, Dean of the Technion’s Andrew and Erna Viterbi Faculty of Electrical Engineering. “In fact, I was merely trying to prove properties of convolutional codes…I’d stumbled over a golden nugget which others might have ignored because it didn’t look shiny.” Upon publication of the algorithm, Viterbi announced that he was donating it to the benefit of the public and waiving royalties. The algorithm has been adopted and deployed in a variety of applications. Prof. Viterbi later made his fortune with Qualcomm, which he co-founded with Irwin Jacobs.

Technion President Prof. Peretz Lavie said at the ceremony in honor of Viterbi, “Andrew is an outstanding engineer and entrepreneur who has contributed generously to Technion. He has always believed that scientific research is a long path in a dark forest where people find things they were not looking for. I recently read his autobiography and discovered details that I did not know despite our acquaintance of many years. When Andrew was four years old, the Viterbi family was forced to leave Italy because the government had stripped its Jews of civil rights. The family emigrated to the United States, where Andrew completed his elementary and high school studies. In his memoir, he writes about his youth in the United States, ‘We fell through the cracks because Americans considered us to be Italians and Italians considered us Jews.’ His academic career led him to UCLA.” 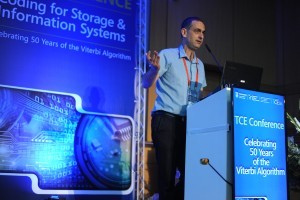 Prof. Viterbi visited Israel for the first time in 1967, the year the article was published. Here, at Technion’s Faculty of Electrical Engineering, he established close friendships with Profs. Jacob Ziv and Abraham Lempel (who later became the developers of the Lempel-Ziv algorithm, which also revolutionized the field of communications) and with Profs. Israel Bar-David and Moshe Zakai. Over the years, his close ties with Technion have found expression in his activities at the American Technion Society (ATS), which awarded him the Albert Einstein Prize; and the establishment of the Andrew and Erna Finci Viterbi Center for Advanced Studies in Computer Technology, Andrew J. and Erna F. Viterbi Chair in Information Systems/Computer Science, Andrew and Erna Finci Viterbi Fellowship Program, and Viterbi Family Foundation Faculty Recruitment Program. His greatest contribution to Technion’s Faculty of Electrical Engineering, $50 million, was announced in June 2015 and followed by the naming of the Faculty of Electrical Engineering after him and his wife, Erna.

Prof. Viterbi holds an honorary doctorate degree from Technion. He is a distinguished visiting professor at the Faculty of Electrical Engineering, a member of Technion’s International Board of Governors, and a Guardian, a title reserved for those who have donated particularly large sums to Technion.

The special session marking the anniversary of the development of the algorithm was chaired by Prof. Paul Siegel, a longtime colleague and friend of Prof. Viterbi. Prof. Siegel noted that 1967 was a dramatic year in the world not only because of the Viterbi algorithm, but also because of the Six-Day War, which removed the threat to the State of Israel’s existence, and the release of the Beatles’ album Sergeant Pepper, which revolutionized the music world. He added, “Viterbi is an academic pioneer who became a visionary businessman and ultimately also a philanthropist. We must learn from him.” 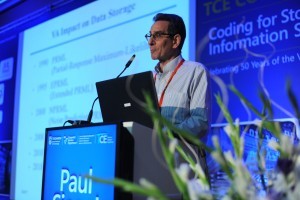 The festive event took place at the Technion’s 7th annual TCE Conference. This year, the conference focused on coding for storage and information systems, and included lectures on diverse topics including: coding that enables the reliability of flash memory, reliable storage systems of high speeds and massive volumes, and the challenges of cloud storage and DNA storage.

The conference organizers, Asst. Profs. Eitan Yaakobi (Faculty of Computer Science) and Yuval Cassuto (Faculty of Electrical Engineering) are third-generation experts in coding and information theory. Today, Technion is recognized as a center of excellence in these fields.