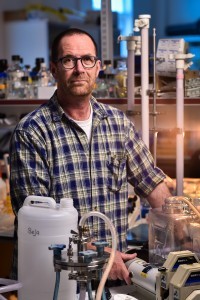 Prof. Oded Béjà of the Technion Faculty of Biology

HAIFA, ISRAEL – Marine microorganisms pose a research challenge for biologists, since many of these microorganisms cannot be grown in the laboratory. One way to study them is to collect water from the ocean and study the genetic material (DNA) the sample contains.

In their April 27 article published in Current Biology, researchers from the Technion-Israel institute of Technology present new findings obtained in this way about viruses that attack microorganisms from one of the archaeal marine groups (Euryarchaeota). This group is highly abundant in the oceans, and can produce energy from sunlight using a mechanism that is different from photosynthesis. But little is known about this group, and the team’s findings shed light, for the first time, on the interaction between key groups in the marine ecosystem.

In the study conducted by Dr. Alon Philosof, under the supervision of Prof. Oded Béjà of the Technion Faculty of Biology, samples of dozens of liters were collected from the surface water layer in the Gulf of Eilat, from which DNA segments were sequenced. The researchers used the DNA segments to identify the microorganisms living in these waters. This was done by means of metagenomics – a bioinformatics approach that combines computer science algorithms with biological knowledge.

The researchers assembled the DNA segments computationally – a method similar to putting together a jigsaw puzzle from millions of pieces without a picture to serve as a guide. In doing so, they were able to reconstruct the genomes of viruses that attack the marine archaea. This complex reconstruction was made possible through the use of the ATLAS computing system (which is also used to analyze results from the CERN particle accelerator in Switzerland).

In all, 26 viruses that were previously unknown to science were detected in the study.

“On the basis of the similarity between segments of the genetic material of the viruses and those of the marine archaea, we began a detective work and concluded that these viruses attack those microorganisms,” said Dr. Philosof. “This was accomplished without the possibility of growing the viruses or the archaea in the lab.”

Environmental microbiology, especially in the oceans, is one of the last frontiers of ecology. The methods used in this study enable researchers to explore this terra incognita. The results of this study shed new light on the evolution of an important archaeal group and its viruses.

The study was funded by the European Union (European Commission ERC Advanced Grant), the Technion’s Lorry I. Lokey Interdisciplinary Center for Life Sciences and Engineering and the Technion’s Russell Berrie Nanotechnology Institute. 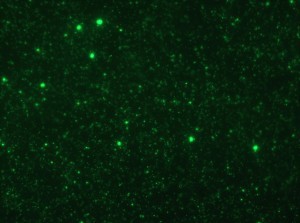 This image, taken using a fluorescent microscope, shows a large number of viruses (small dots) and Archaea or Bacteria (large dots). Seawater were filtered to dispose of large cells such as algae and most of the bacterial cells, and DNA was stained with a fluorescent dye 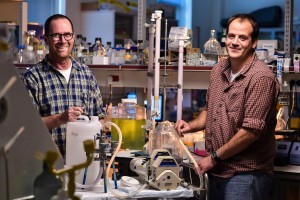 Prof. Oded Béjà (on the left) and Dr. Alon Philosof