This weekend, Prof. Hossam Haick of the Technion received the Humboldt Research Award in Germany. In addition, Prof. Haick was selected as one of the 100 influential figures published by the American GOOD Magazine 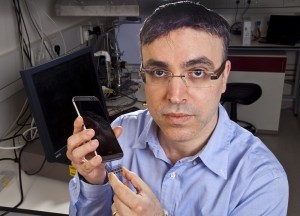 This weekend, Prof. Hossam Haick of the Technion received the Humboldt Research Award, awarded by the Alexander von Humboldt Foundation in Germany. The award is given to prominent researchers who have significantly influenced their fields of study, provided they maintain some type of cooperation with research institutes in Germany. It is granted in recognition of a researcher’s achievements as a whole – discoveries, theories, and insights.

Prof. Haick, a member of the Wolfson Faculty of Chemical Engineering and a member of the Technion’s Russell Berrie Nanotechnology Institute, received the award for his tremendous contribution to the diagnosis of diseases through innovative markers that he discovered in his research at Technion. These are markers that are present in the breath and skin.

At the same time as the announcement about the Humboldt Research Award, Prof. Haick was included in the list of the world’s 100 most influential people published this week by GOOD Magazine in Los Angeles. The list includes people from 37 countries who contribute to the welfare of humankind in various aspects, including science, education, and business. What they all have in common, according to the list’s compilers, is that they are figures “who spearhead change and refuse to accept the existing reality as the end of the story. Not one of the 100 people we have chosen operates out of a desire for fame – which is precisely why it is important to recognize their activity.”

Prof. Hossam Haick earned his doctorate in the field of energy and only later switched to biomedical technology. He said, “Precisely because I am not a doctor I was able to conceive such a unique development – an inexpensive and noninvasive system for diagnosing diseases based on breath. Inspired by dogs, who know how to identify disease but not to tell the person what disease he has, I developed this digital system that accurately diagnoses the disease and its stage of development. Today, we are working on several aspects of the system, including diagnosis of additional diseases and an interface that connects it to a smartphone.