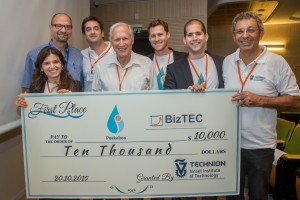 The National Entrepreneurship Competition for students ended yesterday with first prize going to the Peekaboo team, which developed technology for non-invasive collection of sterile urine from baby girls.

Innovative technology for the non-invasive collection of sterile urine from baby girls, developed by three students from the Technion, won first prize yesterday at the finals of the BizTEC Entrepreneurship Competition held at Microsoft’s R&D center in Herzliya, Israel. The winning team, Peekaboo, whose members are Janna Tenenbaum-Katan, doctoral student at the Faculty of Biomedical Engineering, and Lior Har-Shai and Yoel Angel, graduates of the Rappaport Faculty of Medicine, received a 10,000 prize from the Technion, the main financier of the competition. Second place went to DeepSense, which predicts and helps prevent failures in industrial machines, and third place to SelfLift – a sustainable and inexpensive irrigation solution for “small” farmers. Other technologies that reached the finals: an app for locating products in stores; smartphone-controlled robots; home monitor for pulmonary diseases; a non-invasive cardiac monitor; a system for navigation inside buildings; a laboratory management platform; a smart needle for tumor biopsies; and a wearable system designed to shorten athletes’ recovery time.

The BizTEC Competition was established in 2004 as an internal Technion competition, and is now a countrywide competition open to all students and university graduates in Israel. Since its establishment, BizTEC has “given birth” to over 120 startups, which have raised more than 100 million over the years. Tomer London, BizTEC’s first prize winner in 2009, recently raised 60 million from Google Capital. LifeBond Ltd, first prize winner in 2006, has raised a cumulative total of more than 50 million. And these are just two examples of many.

The winning team, Peekaboo, was born in the Medical 3DS Competition held at the Technion’s Rappaport Faculty of Medicine on the initiative of Faculty Dean Professor Eliezer Shalev. The team won first place in the competition, thanks to its development of an innovative and simple approach to collecting contamination-free ( sterile ) urine from baby girls, effectively but non invasively. According to Tennenbaum-Katan, the mother of two little girls, “the current collection method is inconvenient for both the child and the parent, and invasive collection is clearly even more unpleasant. Every year 1.8 million baby girls undergo invasive urine collection in the United States alone, and our interviews with medical personnel indicate that our product has significant medical and economic potential, with sales of over 17 million units per year in the US alone.” After the announcement, Tennenbaum-Katan said: “It is very exciting to know that not only do we believe in ourselves, but the judges also believe in us.” 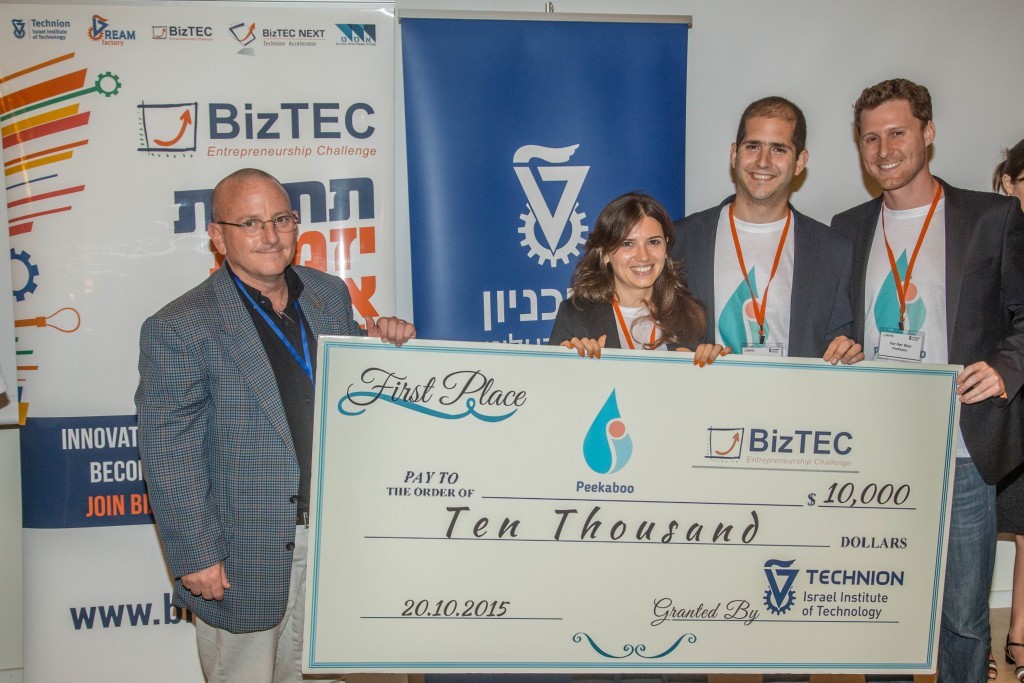 Professor Wayne Kaplan, Technion Executive Vice President for Research, added: “Entrepreneurship on the part of students and faculty is one of our main goals today, and we are promoting it through the business unit (T3), the Bronica Entrepreneurship Center and our accelerators.”

Sasson Yona, chief mentor of the competition, said that working with the students competing in BizTEC is “an extraordinary experience, characterized by motivation, talent and diligence. With entrepreneurship there is no paved road – and each group paves its own road.”

Competition Director Tomer Aharonvitch said: “We started the year with 85 teams, most of them (58%) from the Technion, and we chose the 30 best teams to continue with us in a training and team-building program, accompanied by our partners from industry, with around five mentors for each team. We invite students and alumni of the Technion and other schools to participate in the competition and the training that we provide. We don’t demand royalties or anything else – just a commitment to the project and to the program.”