America Online (AOL) to Invest $5M in a Technion Research Project, Conducted Jointly by JTCI and AOL Relegence Israel; AOL Executives from the US and Israel Visited the Technion Last Week. 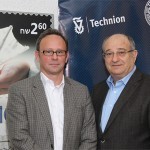 AOL, the American Internet and media company, announced last week that it will be investing $5 Million at the Jacobs Technion-Cornell Institute to fund research projects conducted by faculty at the Jacobs Institute, at the Technion Computer Engineering Center and at Cornell Tech, with AOL researchers at AOL Relegence… and in New York.

This collaboration is intended to encourage researchers at Technion and Cornell Tech to expand their research efforts in areas including communication and coordination, food and wellness, education and safety, information and entertainment so that it may provide more extensive and accurate information to decision makers, while empowering local communities.

Since AOL’s R&D Center in Israel specializes in developing innovation in the field of online video, the Technion research project will focus on this issue and will examine the effects of video viewing on the viewer’s senses. The study will include researchers from areas of psychology, computer science, and other related fields; it will be conducted by a heterogeneous research group of women and men.

According to Prof. Mor Naaman, a faculty member at JTCI, “Diversity is a major goal of any organization, whether academic or otherwise, and therefore any technology we will develop must serve the entire population, and half of the population happens to be female. Therefore, it is appropriate to reflect this 50-50 ratio within the team’s composition.”

As part of their visit, Pence and his colleagues were given a tour of the Geometrical Image Processing Lab in the Faculty of Computer Science, founded and headed by Prof. Ron Kimmel. Here they were presented with a customized inhalation mask and a demonstration of realistic stereoscopy technology.Later, the group visited the Parallel Systems Laboratory in the Faculty of Electrical Engineering, headed by Prof. Yitzhak Birk.