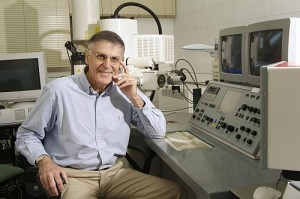 Prof. Shechtman, of the Technion’s Department of Materials Engineering and holder of the Philip Tobias Chair in Materials Science, won the award for his 1982 discovery of Quasicrystals, an entirely new form of matter with a structure that scientists previously thought was impossible.

Israel’s President Shimon Peres called Prof. Shechtman to congratulate him: “I salute you, you gave the people of Israel a wonderful gift. This is a great day for Haifa, a great day for the Technion.”

“That an Israeli has once again been awarded a Nobel Prize is a mark of distinction for Israeli science in general and for the Technion,” said Technion President Peretz Lavie.  “And the fact that this is the third Nobel Prize in Chemistry for Technion researchers in eight years is a clear indicator of the world-class research being done here.”

Since then, Quasicrystals have been produced in laboratories and a Swedish company found them in one of the most durable kinds of steel, which is now used in products such as razor blades and thin needles made specifically for eye surgery, the Nobel citation said.

Scientists are also experimenting with using Quasicrystals in coatings for frying pans, heat insulation in engines, and in light emitting diodes (LEDs).

On April 8, 1982, when Shechtman first observed crystals with a 10-point pentagonal symmetry in the NBS laboratory in Maryland, crystallography had long been considered a “closed field” promising no revolutionary breakthroughs. Shechtman’s groundbreaking quasiperiodic structure was first described in Physical Review Letters in 1984, marking the birth of a new scientific field of Quasiperiodic crystals.

The scientific community, led by two-time Nobel laureate Linus Pauling, rejected Shechtman’s findings, but in 1987, the pattern which had previously been considered contrary to the laws of nature was observed with the help of the electron microscope.

More than 40 scientific books have been dedicated to Quasiperiodic crystals, and hundreds of materials are known to exist with the structure discovered by Shechtman.  In the wake of his discovery and its proof, the International Society of Crystallographers changed its basic definition of a crystal.

Prof. Shechtman’s Nobel Prize follows many other prestigious awards including the Aminoff Prize from the Royal Swedish Academy of Sciences (2000), Wolf Foundation Prize in Physics (1999), Israel Prize in Physics (1998), Weizmann Prize in Science (1993),  Rothschild Prize in Engineering (1990) and the International Award for New Materials of the American Physical Society (1987).  He is a member of the Israel Academy of Sciences and the U.S. National Academy of Engineering.