Dr. Albert Abraham Bourla, Pfizer Chairman and CEO, received an honorary doctorate yesterday from the President of the Technion – Israel Institute of Technology, Professor Uri Sivan, during the graduation ceremony of 1,869 Technion undergraduates. Dr. Bourla received the award “in acknowledgment of his exceptional leadership in advancing the rapid development of a safe and effective vaccine against COVID-19; with gratitude for spearheading this monumental feat in the face of a global crisis; and in admiration of his steadfast commitment and pioneering ingenuity, which embodies the highest values and standards of excellence in scientific innovation.”

Technion President Prof. Uri Sivan said: “As Chairman and CEO of the Board of Pfizer Inc., Dr. Bourla headed the trailblazing effort to develop a vaccine against the novel coronavirus. The development of the COVID-19 vaccine is an extraordinary biotechnological achievement that exemplifies the importance of science and multidisciplinary research. The vaccine helped rescue the world from the crisis that began at the end of 2019, with the epidemic outbreak. Dr. Bourla’s family history, as a son of Holocaust survivors from Thessaloniki, is a symbol of the remarkable vitality of the Jewish people and their renewal capacity in the wake of the Holocaust.”

Dr. Bourla addressed the students in a moving and inspiring speech. “As a scientist and a Jew, I can’t overstate how much it means to me to receive this degree and to be invited to address this year’s graduating class. Since first opening its doors in 1924, the Technion has been a beacon of light not only for Israel, but for the entire world. The story of the Technion, like that of my company, Pfizer, is one of innovation, but also of courage and optimism – all of which have helped give birth to technological and scientific breakthroughs aimed at making the world a better place. 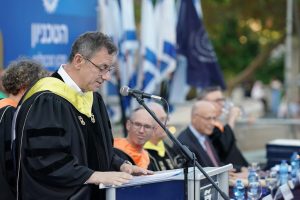 “Innovation, courage, and optimism are three things that define my colleagues at Pfizer. It took courage to make the counterintuitive decision to use mRNA technology in the COVID-19 vaccine we developed with BioNTech. This courage not only helped us deliver a safe and effective vaccine in only nine months, but it may also prove to be an important step in unlocking the great promise that the technology holds for many other therapeutic areas, including cancer and rare disease. Our successful vaccine journey showed us we can make the impossible possible – and our colleagues are now taking this newfound optimism to their work in other areas.”

He ended by citing human ingenuity, compassion, and courage, as values for the graduates to aspire and hold on to. “As you approach the many alternatives that lie ahead in your journey, always remember to aim high, be resilient, and remain optimistic in all you do. If you do, you just might be surprised with what you can accomplish – and the lives you will impact.” 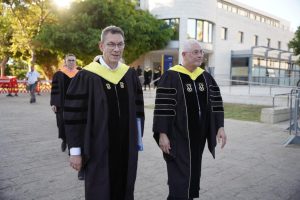 Dr. Albert Abraham Bourla was born in Thessaloniki in 1961 to a Jewish family, part of which perished in the Holocaust. His family, who arrived in Greece from Spain following the Alhambra Decree, dealt in jewelry and diamonds, and their business spread across many countries. The Thessaloniki Jewish community, once the largest in Greece, had a population of approximately 80,000 in the 1930s. Approximately two-thirds of them perished in the Holocaust.

Dr. Bourla completed all his academic degrees at the Aristotle University of Thessaloniki and holds a Ph.D. in veterinary medicine and reproductive biotechnology. In 1993 he joined Pfizer, one of the world’s leading biopharmaceutical companies, where he went on to hold a series of positions. He oversaw antibody development and served as Group President of VOC – Pfizer’s Global Vaccines, Oncology, and Consumer Healthcare business. In October 2018 he was appointed Pfizer’s Chief Operating Officer, in 2019, he was appointed CEO, and in 2020 he became Chairman of the company.

In recent years, Dr. Bourla has led Pfizer in strengthening ties with technology companies and in adopting technologies such as artificial intelligence. At the beginning of 2020, following the global outbreak of the COVID-19 epidemic, he harnessed most of the company’s resources to develop a vaccine, meeting challenging schedules. Throughout the process, Dr. Bourla promised there would be no compromise regarding the safety of the vaccine, and approval was obtained after an extensive study that included more than 40,000 subjects.

An honorary doctorate is the highest honor bestowed by the Technion – Israel Institute of Technology upon the few who distinguished themselves through their outstanding scientific work or their leadership and public service to the benefit of Israel, the Jewish people, and humanity at large. Some notable examples include Chaim Weizmann (1952), Albert Einstein (1953), Niels Bohr (1958), David Ben Gurion (1962), Yitzhak Rabin (1990), Margaret Thatcher (1989) and Dr. Angela Merkel (2021).