The Zisapel Electrical and Computer Engineering Building was inaugurated last week at the Technion – Israel Institute of Technology during the Board of Governors meeting. The eight-story, 5,400 square-meter building will house the Andrew and Erna Viterbi Faculty of Electrical and Computer Engineering. Its construction was made possible thanks to a generous donation from the Zohar and Yehuda Zisapel, who are both alumni of the faculty. Last week, the brothers were awarded the Technion Medal – the most prestigious award bestowed in recognition of life-long support of the Technion. 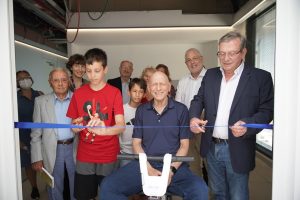 “We enrolled at the Technion 50 years ago because it was the best engineering school in Israel – and actually also the only one,” said Zohar Zisapel. “Now we must preserve the Technion’s elite stature, which is why we are pleased that we are able to help.” His brother Yehuda Zisapel said that “The Faculty’s first building, where we studied, was donated by Fishbach, an American Jew, and was named for him. It’s a big honor for us that the new Faculty building was donated by us – Israelis who studied at the Technion.”

“It is rare for an institution of higher learning and research to make such a huge impact on a society and a country as the Technion did for Israel,” wrote President of Israel Yitzhak Herzog to Yehuda Zisapel. “Thanks to your many years of work, Zisapel brothers, there is today a bustling state-of-the-art research center that serves dozens of research groups from the Technion and elsewhere, enabling the faculty to boost its standing at the forefront of global research. In this way, the Technion will continue to train the best engineers and researchers for Israel’s high-tech industry, which needs the best engineers in order to enable its continued growth and prosperity.”

Technion President Professor Uri Sivan said, “Every time I visit the Viterbi Faculty of Electrical and Computer Engineering, I am aware that this is a unique Faculty with an enormous impact on the State of Israel. Zohar and Yehuda gave an important push to the field of nanotechnology, which led to a revolution in Israel’s technological capabilities. They identified the importance of this field at a very early stage and generously contributed to its development at the Technion. The new building will help us continue to develop the faculty.” Prof. Sivan thanked Yehuda and Zohar for their support, their partnership, and their friendship. 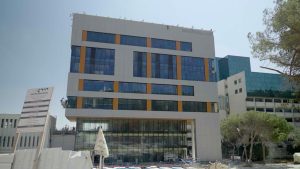 The new Zisapel Building at the Technion.

“Israel suffers from a severe shortage of engineers and technological workers,” said Yehuda Zisapel. “Our donation to this building reflects our vision of helping the Faculty and the Technion increase the number of faculty members as well as the scope of research and teaching fields, and to train more young engineers for the benefit of Israel’s high-tech industry.” He added that, “We began studying at the Technion before the term ‘Israeli high-tech’ was coined. We are proud to play a part in the faculty’s development, and we hope that the new building will not only be used to expand the faculty but also to tighten the connection between the Technion and industry.”

Professor Idit Keidar, dean of the Viterbi Faculty of Electrical and Computer Engineering, said that “The new building will enable us to carry out the quantum leap that the Faculty needs – recruiting brilliant faculty members and advanced-degree students, entering new research fields such as quantum technologies and AI applications in a wide range of fields, and building an improved computer infrastructure, which is necessary for new breakthroughs. On behalf of all of us, I would like to thank Zohar and Yehuda Zisapel. I promise the new building will be buzzing with activity and teeming with life.” 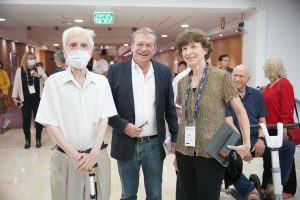