Lighting up cells to fire up the immune system: Technion researchers create a light-based switch to control pain, as well as the intensity and location of immune response through the cell's calcium-storage mechanism

Calcium is an element that is vital to our health. While its effects on bone strength are particularly well known, it has a far broader function in the human body. Calcium is a “messenger” that transmits signals between cells and plays an important part in processes that control gene expression in immune cells, muscle contraction, electrical transmission in the nervous system, and many other body functions. Abnormal changes in calcium levels in cells are liable to lead to various illnesses, and as a result, a complex control system that regulates the levels of calcium in cells has developed throughout the course of evolution.

Professor Raz Palty of the Rappaport Faculty of Medicine has spent many years studying a central cellular process called store-operated calcium entry that nearly all types of cells use in order to control the levels of their internal calcium stores. Previous research studies have shown that two different proteins called STIM and Orai play a key role in this machinery. The STIM protein senses the levels of calcium in the cell’s internal stores. When the stores empty, STIM communicates this information to Orai, which is a calcium entry channel in the plasma (cell) membrane. Opening of the Orai channel by STIM allows for calcium entry into the cell and replenishment of the cell’s stores. 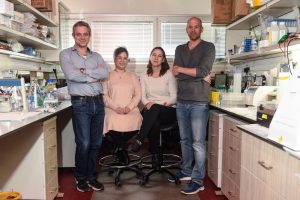 That is how the function of the Orai-STIM store-operated calcium entry system works under normal conditions. However, when this regulation system stops working (for example due to loss of function mutation to one of the two essential proteins), the clinical consequences can be catastrophic, including serious harm to the function of T cells, which are an essential part of the immune system.

“The store-operated calcium shuttling system in the cell has been studied for many years,” explained Prof. Palty, who conducted the research together with Dr. Ronald Udasin and Dr. Elia Zomot. “But since this is a highly complex system that generates different calcium signals in different types of cells and also works alongside other calcium entry mechanisms, in a ‘noisy’ environment, it is often very hard to study the role of this cellular machinery under normal physiological settings in which cells are exposed to their native agonists.”

Over the past few years, Prof. Palty’s research group has worked on this challenge, using a variety of techniques from chemistry, biology, and physics, in collaboration with the research groups headed by Professor Yuval Shaked of the Rappaport Faculty of Medicine and Professor Michael Kienzler of the University of Connecticut. The researchers’ article in PNAS describes the present breakthrough in establishing a technology that allows for a precise spatial and temporal control of calcium entry via STIM and Orai.

The technology presented in the article is based on a novel approach called photopharmacology – the activation of drugs that block calcium entry through Orai channels in the target tissue using light. The researchers built a form of optical switch that grants them control of when and where drugs introduced to the body are active, and in a reversible manner. In this way, they are able to control the level of calcium influx via the Orai channel into the cell and to do it in the desired location and time. Using this technology, the research group succeeded in modulating calcium entry in T lymphocytes and in regulating the production of cytokines that are crucial to the functioning of the immune system.

Furthermore, in a series of experiments in collaboration with a research group led by Professor Alex Binshtok of the Hebrew University of Jerusalem, the researchers found that the Orai-STIM store-operated calcium shuttling machinery is also active in the sensation of pain, meaning that its manipulation may facilitate a more accurate understanding of pain transmission mechanisms. The follow-up study with research groups of Professor Michael Kienzler and Prof. Binshtok is designed to provide the researchers with a deeper understanding of these regulation mechanisms and to broaden the clinical applications of the technology they have developed. 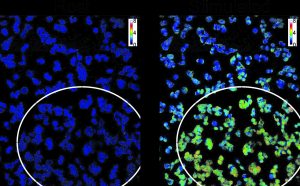 Calcium cell level. On the left – intervention-free; on the right – after using the technology developed by the Technion research group. The white circle marks the illuminated area in which the light activates the molecule that triggers calcium influx into the cell.