On March 31, the Technion – Institute of Technology received a historic visit from a Moroccan delegation headed by Mr. Hicham El Habti, President of Morocco’s Mohammed VI Polytechnic University (UM6P) – one of Morocco’s leading technical universities. UM6P focuses on applied research and innovation with an emphasis on African development and maintains international relations with other leading institutions, including the Massachusetts Institute of Technology (MIT), McGill University, and the Max Planck Institute. 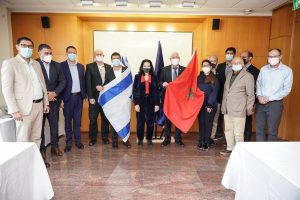 The high-level delegation from Morocco, together with Technion representatives

Technion President Prof. Uri Sivan addressed the delegation and said that their visit to the Technion “reflects a rapid and dramatic historical change in the region. We at the Technion are determined to participate in leading this process and building bridges through education and research. Since the Abraham Accords, we have received delegations from the UAE and Bahrain, countries that none of us ever imagined would come to visit. Both of our institutions – the Technion and UM6P – educate young people and equip them for the future. The cooperation we are establishing here today goes beyond its academic value; it is our duty to the region and to the future of the next generation.”

The President of Morocco’s Mohammed VI University, Mr. Hicham El Habti, studied applied mathematics, economics, and engineering in France and worked for many years at the phosphate company OCP, where he served in a series of senior managerial positions. “Today we are signing a piece of paper,” he said at the ceremony, “but what is more important is what stands behind it – the mutual desire for cooperation, which will lead to student and faculty exchange from both institutions. It is an honor to be here at the Technion – and a great responsibility. We are part of an historic era, and we must continue to strengthen ties between Morocco and Israel. As a very young university, we are open to international cooperation and are delighted to establish this relationship with you.” 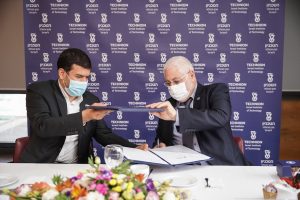 After the signing, both presidents exchanged gifts; Mr. Hicham El Habti gave the Technion President a book on the history of Moroccan Jewry, and Prof. Sivan gave the UM6P President a glass engraving bearing the symbol of the Technion.

“There are many similarities between Morocco and Israel,” said Prof. Koby Rubinstein, Executive Vice President for Research of the Technion, “both in the physical terrain and climatic conditions, as well as in our people and interests. This cooperation is important to us and has every reason to be successful.” 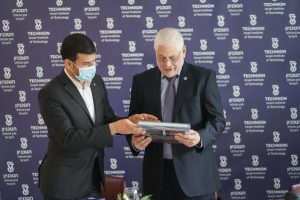 After the agreement was signed, the delegation visited the David and Janet Polak Visitors Center, where they were impressed by the research and technology discoveries and breakthroughs of Technion researchers, including those of Nobel Prize laureates from the Technion. Many of the discoveries showcased led to the establishment of groundbreaking technology companies. They also visited the Electron Microscopy Center at the Technion headed by Dr. Yaron Kauffmann. Afterwards, individual meetings took place between delegation members and Technion faculty with the aim of furthering specific collaborations in various fields of research relevant to the two countries. Topics of those discussions include water engineering, energy, biotechnology and food engineering, biomedical engineering, entrepreneurship, and artificial intelligence.