Researchers at the Technion – Israel institute of Technology, in collaboration with researchers from CNRS, recently published findings about the development of an artificial molecule that may inhibit the development of Alzheimer’s disease. The molecule breaks down the toxic chemical complex Cu–Aβ, thus inhibiting the cell death that is thought to be related to Alzheimer’s. The study was led by Professor Galia Maayan and doctoral student Anastasia Behar from the Schulich Faculty of Chemistry, in collaboration with Prof. Christelle Hureau from the Laboratoire de Chimie de Coordination du CNRS, Toulouse, France. 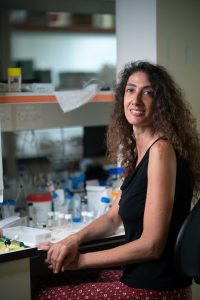 Copper ions are a key component of the structure and function of various cells in the body. But their accumulation can lead to cell toxicity, causing dangerous conditions such as oxidative stress, cardiovascular disorders, and degenerative diseases of the brain, including Alzheimer’s.

One of the mechanisms involved in the development of Alzheimer’s is the formation of free radicals that damage the brain cells. These are oxidizing agents formed, among other things, by Cu–Aβ, a complex of copper and amyloid beta. 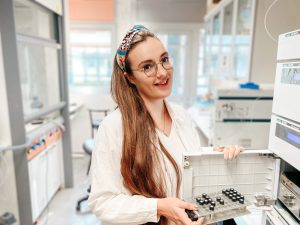 However, this is not a simple challenge, because the chelators must meet several critical chemical and kinetic conditions, including stability and resistance to oxidation-reduction reactions. It is also important that the chelator does not bind zinc ions during the copper extraction process, as they are also essential for neuron function (but do not cause toxicity when they are bound to the amyloid); if the chelator does not bind the zinc, it can continue to bind the copper ions, but if it binds zinc, copper binding will be inhibited.

The Technion and CNRS researchers report in the Angewandte Chemie on the successful development of a new artificial chelator that meets all these requirements. The chelator, called P3, is a peptide-like water-soluble synthetic molecule that performs its task selectively; it strongly binds copper and forms the complex CuP3, extracting the copper from the amyloid. By doing so, it inhibits and even suppresses the formation of harmful oxidizing agents, without creating new oxidation processes. Although it binds zinc ions and even extracts them from the amyloid faster than it extracts the copper ions, the binding to zinc is weaker, making the zinc-amyloid complex unstable, so in practice P3 mostly binds copper ions. 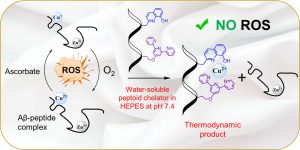