Shortly after the AI-based advanced tool was introduced, there was a 35% drop in the need to switch antibiotics. The technology was developed by the Technion and Maccabi Healthcare Services

Doctors at Maccabi Healthcare Services have recently begun to work with an AI-based predictive algorithm developed by the Technion – Israel Institute of Technology together with KSM (Kahn-Sagol-Maccabi), the Maccabi Research and Innovation Center. The new algorithm advises doctors in the process of deciding on personalized antibiotic treatment for patients.

The first diagnosis on which Maccabi chose to focus is urinary tract infection (UTI) – the most common bacterial infection among women. Around 30% of the females suffer from the infection at least once during their lifetime, and up to 10% experience recurrent infections. Until now, in most cases general treatment has been administered based on clinical guidelines and medical judgment. Sometimes, the bacteria prove to be antibiotic resistant, resulting in the need to change the treatment plan.

Since the new algorithm was introduced, Maccabi doctors have treated tens of thousands of cases, and there has been a drop of around 35% in the need to switch antibiotics following the development of bacterial resistance to the drug prescribed. This is significant because accuracy in the choice of antibiotic is far greater thanks to the new technology. In light of the success of this new development in the treatment of UTI, Maccabi has begun working on the development of additional detection systems that will help to contend with other infectious diseases that require personalized treatment with antibiotics. 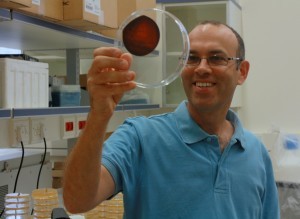 How does it work?

The automated system recommends the most suitable antibiotic treatment for the patient to the doctor, based on clinical guidelines and other criteria such as age, gender, pregnancy status, residence in an assisted living facility, and personal history of UTI and antibiotics administered.

The unique algorithm was developed by Professor Roy Kishony and Dr. Idan Yelin of the Technion Faculty of Biology, in cooperation with KSM, Maccabi’s Research and Innovation Center, headed by Dr. Tal Patalon, and was introduced and implemented among Maccabi’s doctors by the HMO’s Medical Informatics team and Chief Physician’s Department. According to Prof. Kishony, “The algorithm we developed together with Maccabi’s experts is a major milestone in personalized medicine on the way to AI-based antibiotic treatments, which are personally tailored to the patient according to the prediction of treatment response and mitigate the development of resistant bacteria.”

Dr. Shira Greenfield, Director of Medical Informatics at Maccabi Healthcare Services, said, “The significance of administering personalized antibiotic treatment is that it lowers the risk of antibiotic resistance developing – a global problem which all healthcare entities are working to solve.”