This year’s Technion team is the largest ever.

This month, three universities will participate in the inaugural Israeli Formula SAE Race: The Technion – Israel Institute of Technology, Tel Aviv University, and Ben-Gurion University of the Negev.

The Technion Formula Student Team has been led by the Faculty of Mechanical Engineering since 2013. Academic guidance is provided by Prof. Leonid Tartakovsky, who replaced Prof. Reuven Katz, the project supervisor from 2013 to 2019. 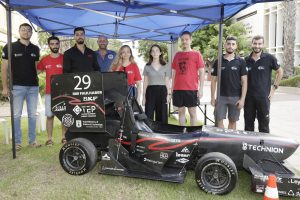 The Technion team with the 2021 model

Headed by Muans Omari, a master’s student in the Faculty of Mechanical Engineering, this year’s Technion team is its largest ever, made up of more than 60 students from various faculties. This is Omari’s third year participating in the project; he started out as a volunteer and driver, subsequently progressed to head of the engine crew, and since 2021, has served as the Technion’s project lead. As a driver, he won first place driving on the figure-8 Skidpad circuit in the Czech Republic in the summer of 2019, just before the global COVID-19 outbreak. During that race, the Technion unveiled the lightest car in the history of the competition, which weighed in at just 132 kg of advanced technology, after “Technion Formula” shed 120 kg in just three years.

“After two years in which we were prevented from participating in races in Europe because of the pandemic, we decided to bring the race to Israel,” said Omari, “and the three universities that will be competing in October – the Technion, Tel Aviv University, and Ben Gurion University – are fully on board. This is a unique, adrenaline-intensive motorsport event that combines engineering theory and technological applications. We believe it will have a direct impact on the vehicle industry in Israel and encourage investors and local firms to develop vehicles and other relevant products.” 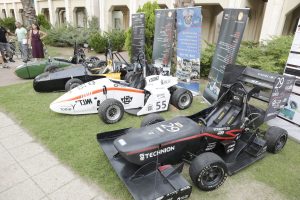 The Formula cars from the Technion – Israel Institute of Technology, Tel Aviv University, and Ben-Gurion University of the Negev

The opening event in August 2021 was attended by experts from the Ministry of Transportation, who advised the teams on adapting the car to comply with licensing requirements in Israel.

Formula Student is a series of international competitions in which university teams compete to design, manufacture, and race the best performing racecars. 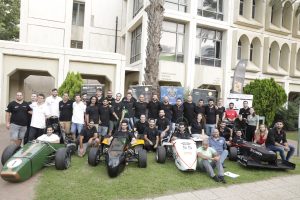