Technion, Wageningen University and Wetsus scientists develop an effective, low-cost way to remove toxic boron from water in the process of desalination

Approximately 80% of drinking water in Israel is desalinated water, coming from the Mediterranean Sea. Now, scientists from the Technion – Israel Institute of Technology, the Wageningen University, and Wetsus (European center of excellence for sustainable water) in the Netherlands have developed a way to improve the quality of desalinated water, while reducing the costs of the process. The findings of the international team’s study were published in PNAS (Proceedings of the National Academy of Sciences of the United States of America).

Desalination is the process that removes mineral particles (salts) from saltwater, making it fit for human consumption and for irrigation. The chemical properties of some particles make them more challenging to remove than others. Boron, which is naturally found in high quantities in the Mediterranean Sea, is among the hardest to remove, as change in acidity causes it to change its properties. It is toxic in high concentrations, and it harms plant growth, which is a problem in the context of irrigation. The normal process of boron removal involves dosing the water with a base in order to facilitate removing the boron, followed by removal of the base.

The most commonly used method of desalination is by means of a membrane – a sort of sieve that allows water to pass through it, while blocking other particles, based on their size or charge. This membrane, however, is expensive, and needs to be replaced periodically.

Ph.D. students Amit Shocron and Eric Guyes, under the supervision of Professor Matthew Suss of the Technion Faculty of Mechanical Engineering, together with their collaborators from Wageningen University and Wetsus, developed a new modeling technique to predict the behavior of boron during desalination by means of capacitive deionization. This is an emerging technique for water treatment and desalination using relatively cheap porous electrodes, as opposed to the expensive membrane. When an electric current is applied, charged particles (like boron under high pH conditions) are adsorbed by the electrodes and hence removed from the water. 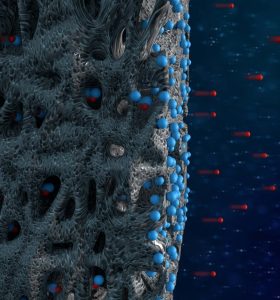 Amit Shocron formulated the theoretical framework that allowed this breakthrough, while Eric Guyes constructed the experimental setup. Working together, they were able to develop the novel system. They found that for optimal boron removal, the positive electrode should be placed upstream of the negative electrode – counter to the accepted wisdom in their field. They also calculated the optimal applied voltage for the system, finding that higher voltage does not necessarily improve the system’s effectiveness.

This same method the group developed could be used to solve other water treatment challenges as well, for example the removal of medicine residues and herbicides, which are difficult to remove using conventional methods.

Schematic demonstrating boron removal by a capacitive deionization (CDI) cell. Shown is a CDI cell with an anode placed upstream and a snapshot of the developed pH profile within the anode. Right: A snapshot of ion and charge distributions in a pore near the anode/separator interface, showing boric acid dissociation and adsorption