German Chancellor Dr. Angela Merkel: “I am proud to receive this honorary degree from the Technion as a scientist and not just as a politician”

On Sunday, October 10, 2021, Technion President Professor Uri Sivan bestowed an honorary doctorate on German Chancellor Dr. Angela Merkel after a moving speech, in which he praised her outstanding leadership and called her “arguably the most admired, influential leader of our time and a role model for all democrats around the world.”

Dr. Merkel was awarded for her continuous and steadfast support of the State of Israel; her unwavering fight against antisemitism and racism; her strong support of science and education, and particularly of scientific collaboration between Germany and Israel; and for her exemplary leadership, wisdom, and humanity.

“I am proud to receive this honorary degree from the Technion as a scientist and not just as a politician,” Dr. Merkel said at the ceremony, held at the King David Hotel in Jerusalem during the Chancellor’s official visit to Israel earlier this week. 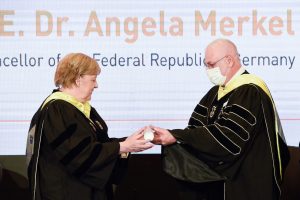 President Sivan acknowledged that Chancellor Merkel has moved from a brilliant scientific career in quantum chemistry to an “unparalleled political career at a time of tectonic changes.” He also spoke of her great humanity toward refugees fleeing armed conflicts in the Middle East and Africa, and her compassion and social responsibility. He described her as a “steadfast friend of Israel and the Jewish people,” and commended her on her public stance against antisemitism and on her unwavering support for Israel.

He went on to talk about the scientific ties and cooperation between Israel and Germany, which under her leadership, “have grown stronger and reached unprecedented heights.”

Chancellor Merkel, who has never forgotten the true meaning of compassion and social responsibility … is constantly striving to improve the lives of millions around the world

President Sivan also spoke about the Technion’s long-standing relationship with Germany, which dates back to its inception in the early 1900s. For example, Prof. Sivan spoke of architect Alexander Baerwald from Berlin, who designed the Technion’s first building, which was inaugurated in 1912. Later, Baerwald was appointed the first Technion Professor of Architecture.

Prof. Sivan referred to the Holocaust, and said that only “a few epitomize the reconciliation” between the two peoples while “taking responsibility for the dark times, as our Laureate today, Chancellor Dr. Angela Merkel.”

He concluded: “Dr. Merkel, we salute you, and wish you the best in your future endeavors. Thank you for what you have given Germany, Israel, and the world. We are forever grateful.” 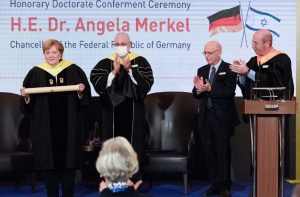 Merkel responded by saying, ”I am proud to receive the honorary degree from the Technion as a scientist and not just as a politician, because science and technology are tools for advancing the economy and society. Israel was founded on a vision that was as scientific–technological as it was political, and some of the beginnings took place at the Technion. The Technion served as a cornerstone in the development of high tech and in what is now called the Startup Nation.”

Chancellor Merkel mentioned how “the Technion’s leadership is also evident in COVID-19, with 50 laboratories engaged in related research … We are amazed at the speed with which data is collected in Israel, data that serves the entire world and contributes to the fight against the virus.” 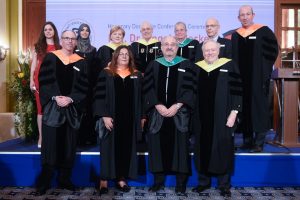 The Chancellor received the honorary doctorate from Prof. Sivan, in the presence of Mr. Gideon Frank, Chairman of the Technion Council; Prof. Oded Rabinovitch, Senior Executive Vice President and a Professor at the Faculty of Civil and Environmental Engineering; Prof. Alon Wolf, Vice President for External Relations and Resource Development and a Professor at the Faculties of Mechanical Engineering and Biomedical Engineering; Distinguished Professor Yitzhak Apeloig, former Technion President and Professor at the Schulich Faculty Of Chemistry; former Technion President, Prof. Peretz Lavie, Chairman of Israel Friends of Technion, and Professor Emeritus in the Ruth and Bruce Rappaport Faculty of Medicine; Nobel Prize Laureate and Technion Distinguished Professor Aaron Ciechanover of the Ruth and Bruce Rappaport Faculty of Medicine; Prof. Marcelle Machluf, Dean of the Faculty of Biotechnology and Food Engineering; as well as graduate students Ms. Lina Muadlej of the Andrew and Erna Viterbi Faculty of Electrical and Computer Engineering (in a joint track with the Henry and Marilyn Taub Faculty of Computer Science), and Ms. Aseel Shomar, a Ph.D. student at the Wolfson Faculty of Chemical  Engineering.

Born in 1954, Chancellor Merkel started her political career in 1989, following the fall of the Berlin Wall. She chaired the Christian Democratic Union Party from 2000-2018; and has served as Chancellor of the Federal Republic of Germany since 2005. Throughout her career, Merkel emphasized international cooperation. She has been described as the de facto leader of the European Union. The New York Times has dubbed her “The Liberal West’s Last Defender.” Merkel has voiced support for Israel on many occasions, and spoken out against antisemitism. Congratulating the new Israeli government in June 2021, Merkel said that Germany and Israel are “connected by a unique friendship that we want to further strengthen.”