One Hundred Sunrises a Day is a public art exhibition showcasing the work of 12 Israeli artists of Ethiopian descent who deal with social issues through a variety of artistic techniques. The artists originate from the Jewish community of Ethiopians who have made Aliyah over the years. It is currently on display in the new gallery at the entrance to the Ullman Building, on the main campus of the Technion – Israel Institute of Technology in Haifa, and will be open, free of charge, through the end of November 2021.

The exhibition was originally shown in Haifa this past spring, across 100 municipal billboards as part of the “Cultural Touches” program – a series of events produced by the Haifa-Boston Connection. In August 2021, the exhibition opened at the Technion in partnership with Tikva Israelit as a way of bringing art into the public space and making it accessible.

“Israeli Hope” is an initiative of Israel’s President; the program aims to establish partnerships among the four main sectors that comprise Israeli society: secular, religious, ultra-Orthodox, and Arab-Israeli. “100 Sunrises a Day” is part of “Israeli Hope in Academia“, an initiative to increase diversity and representation of different populations, while creating a common space for all of them and preserving each group’s unique identity. 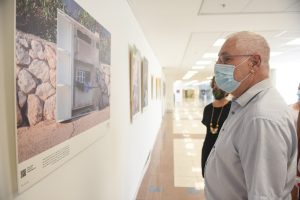 “Promoting multicultural activity on campus and increasing awareness of diversity”

According to Efi Barkai Goral, who heads Tikva Israelit at the Technion, “the program is intended to promote multicultural activity on campus and increase awareness of diversity and cultural competence. The exhibition itself invites us to look at life through the lens of the other. With this in mind, and as part of staff training on cultural competence, meetings are held between artists and faculty members to stimulate thinking and to create dialogue about the place of others within us, as an organization and as individuals.”

Valeria Geselev, curator of the exhibition, said: “In March 2021, my city, Haifa, changed not only because art appeared in spaces dedicated for advertisements. The city changed because it gave room and attention to faces and voices that do not take up space in the public sphere… This is an exhibition that was born on the street, and which expresses the influence of art in the public space. It is not obvious that an academic institution chooses to put on such an exhibition. In doing so, a platform is given to narratives that have not yet been heard.” 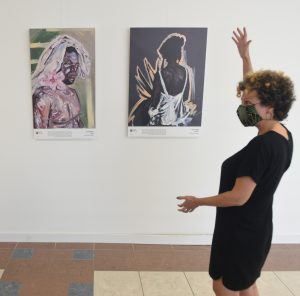 Eden Yilma, one of the featured artists, presented her work during a recent Technion tour and spoke of the importance for her of showing art in public spaces, and specifically exhibiting her work at the Technion – a space where academia meets dialogue; she also spoke of the opportunity to interact with the future generation. She presents her compelling story and trajectory as a third-generation Ethiopian in Israel, and her identity search through art.