From augmented reality to virtual DNA, students at the Technion’s Faculty of Computer Science recently showcased their projects as part of the annual best project contest sponsored by Amdocs

Overall, 21 projects were presented at the June 16 event, their scope ranging from smart traffic lights to reducing hospital paperwork, a project which is already in use at the Galilee Medical Center in Nahariya, Israel. 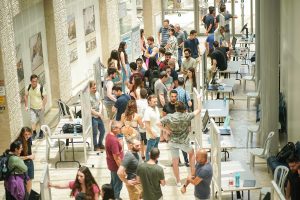 “There is interest in storing information in the form of DNA,” students Gadi Chaykin and Nili Furman said about their award-winning project, advised by Prof. Eitan Yaakobi and Omer Sabary from the Information Storage and Memories Laboratory. “It requires very little space and energy.” However, “the idea is still in development,” they emphasized, “and development is hindered by the high costs of DNA synthesis and sequencing, that is, reading and writing on the ‘memory.’”

To facilitate the research and development of the platform, the two created a DNA simulator, enabling scientists to test algorithmic approaches at little cost. “In the process of copying a DNA molecule, errors of insertion, deletion, and substitution naturally occur,” they said. “We simulated these errors, creating a tool that would allow researchers to examine new coding techniques and new algorithms for DNA storage systems.”

To demonstrate, the two students showed an image of the Mona Lisa converted into virtual DNA, then reconstructed with errors resulting from the simulated DNA-replication process, and finally corrected using an algorithm they wrote.

Every camera and every sensor currently in use produce an image with some amount of “noise” resulting from bad lighting, imperfect electronics and more. Removal of that noise is thus crucial, but remains one of the most complex challenges in the field of computer vision. Current denoising methods, the students explained, produce a “plastic,” artificial-looking image, reminiscent of a computer avatar rather than a person. Something of the vitality of the image gets lost with the noise.

Using deep learning, the group created a novel algorithm that “reimagined” the lost details, resulting in a series of many possible “recovered images” that look much more pleasant to the eye and appear close to the original. An academic article was published based on this project.

Finally, students Almog Brand, Dani Ginsberg, and Lior Wandel showcased their project, focused on improving augmented reality. Augmented reality is meant to be an experience where computer-generated elements are added to the real world we see. Popular mobile game Pokémon-Go is a well known example.

While the virtual objects in augmented reality might appear realistic, the shadows they cast do not, creating a visual dissonance. “Current algorithms might take into account one’s location, season and time of day,” the students explained, “but you might be in a building or outside, with your back to the light source or facing it. We want the shadows to reflect that.” 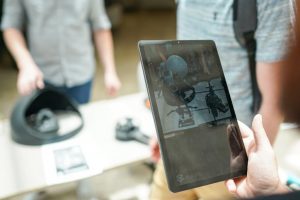 To achieve this, the group created a novel device that continuously samples the lighting situation and inputs it into the augmented reality scene in real-time. The project was advised by Yaron Honen, Boaz Sternfeld and Boris Van-Sosin from the Geometric Image Processing (GIP) lab, the Virtual & Augmented Reality Lab (AVRL) and the Center for Graphics and Geometric Computing (CGGC). 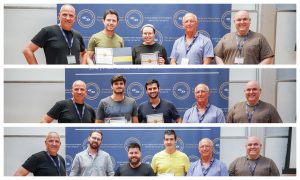 The annual competition, open to undergraduate computer sciences students, aims to recognize the value of independent work as part of a graduate’s training process. It highlights projects that stand out for their innovation and execution. Projects were completed as part of various courses during the students’ studies; they were recommended for the competition by the faculty member in charge of the project. Amdocs has been sponsoring the competition since 2009.