Advancing the Understanding of Semiconductors, for Harvesting Solar Energy

New discoveries by a team of researchers from Technion, BGU, and HZB, are advancing the understanding of semiconductors, for the purpose of harvesting solar energy 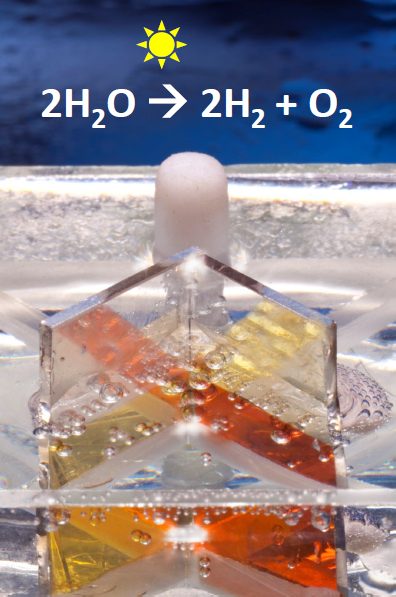 New Discoveries by Technion, BGU and HZB Scientists Advance the Understanding of Semiconductors, for the Purpose of Harvesting Solar Energy

Photovoltaic solar cells are devices that convert sunlight into electricity. Sunlight, however, is available only several hours a day. In order to be used at night, or on cloudy days, energy must be stored to ensure a stable power supply. One approach for doing so is to charge rechargeable batteries during the day, using solar power, and to discharge them to the grid during the night. This requires large-scale battery storage that increases the cost of solar power and is only effective for short-term storage. Long-term seasonal storage requires other solutions.

Another approach, which is the subject of studies by Professor Avner Rothschild from the Technion – Institute of Technology and his research group, is to use photoelectrochemical cells to convert sunlight not into electricity, but into hydrogen fuel produced by splitting water molecules (H2O) into hydrogen (H2) and oxygen (O2). The stored hydrogen can be used later for producing electricity, or put to other uses such as heating, fueling fuel-cell electric vehicles, and various industrial processes such as steelmaking, petrochemical refining, and ammonia production.

At the heart of both photovoltaic and photoelectrochemical solar cells is a semiconductor photoabsorber – a material capable of absorbing photons and generating free charge carriers (electrons and holes) that contribute to the photocurrent. But where commercial solar cells use silicon for that purpose, photoelectrochemical cells must rely on other materials that display greater compatibility to the conditions in which the cell must operate, such as stability in aqueous electrolytes. A promising material for that purpose is hematite, an abundant form of iron oxide whose chemical composition is similar to that of rust. Until now, though, hematite has been frustrating scientists: despite half a decade of research, scientists have been able to obtain from it less than 50% of the solar energy conversion efficiency that theory predicts. Prof. Rothschild’s group now shows in a paper in Nature Materials why this is the case and presents a novel way of assessing the actual efficiency limit that might be obtained from hematite and other semiconductors.

The group postulated that the efficiency loss in hematite is not caused solely from charge carrier recombination, a well-known effect that can be mitigated by nanostructuring and light trapping techniques but occurs also due to internal light–matter interaction effects that cannot be mitigated by these approaches. According to their hypothesis, a portion of the electrons excited by absorbed photons are excited into electronic states that cannot move freely within the material. The absorbed photons that give rise to these localized electronic transitions are thus “wasted” without contributing to the photocurrent.

Using an ultrathin (7 nm) hematite film, the group was able to measure the effect in correlation to wavelength, extracting the so-called wavelength dependent photogeneration yield spectrum. In collaboration with the research group of Professor Roel van de Krol from the Institute for Solar Fuels in Helmholtz-Zentrum Berlin, they measured a similar spectral response of photogenerated charge carriers by another, microwave-based technique. Obtaining similar results by the two different methods serves as a verification of the method and demonstrates that the photogeneration yield is an overlooked, yet fundamental limitation responsible for the underperformance of hematite photoelectrodes for solar energy conversion and storage. The group’s novel method will allow the characterization of other materials in the same way they characterized hematite, providing information on the limitations of different materials and giving access to information about light-matter interaction in correlated electron materials with non-trivial opto-electronic properties. This will open the way to more efficient construction of photoelectrochemical cells, giving access to renewable energy and green hydrogen fuel.

The following took part in the research: Dr. Daniel Grave, a scientist at the Department of Materials Engineering at Ben Gurion University of the Negev; Dr. David Ellis, Yifat Piekner, Dr. Hen Dotan, Dr. Asaf Kay, and Prof. Avner Rothschild from the Department of Materials Science and Engineering and the Grand Technion Energy Program at the Technion – Israel Institute of Technology; as well as Dr. Moritz Kölbach, Patrick Schnell, Dr. Fatwa Abdi, Dr. Dennis Friedrich, and Prof. Roel van de Krol from the Institute for Solar Fuels at the Helmholtz-Zentrum Berlin. The research leading to these results received funding from the PAT Center of Research Excellence supported by the Israel Science Foundation.