Tasneem Watad uses quantum computers as a for research advantage

On the Cutting Edge: The Fastest, Most Complex, and Most Advanced Physical Research

Tasneem Watad, a doctoral student in the Technion Faculty of Physics, uses the complexity of quantum computers as an advantage for research. 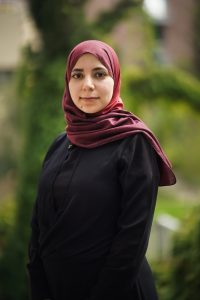 Completing a bachelor’s and master’s degree in physics, and working towards a Ph.D. at the Technion is not a task for the faint-hearted, regardless of gender. But imagine this pursuit being undertaken when Hebrew is not your native language, and when (most of the time) you are the only woman in the room. In such a case, it ought to be called a special endurance mission.

That’s why it is surprising to hear that Tasneem Watad, a Ph.D. student in the Faculty of Physics, does not remember her undergraduate degree done in the framework of the Rothschild-Technion Program for Excellence being particularly scary or difficult. “Since then, the number of women in the faculty has increased, but the gap is still significant, which is surprising because it is a field suitable for everyone, and men have no advantage.”

Watad’s doctoral research, led by Professor Netanel Lindner, focuses on quantum computing, a hot topic today, and one that will change our perception regarding the capabilities of computers. Quantum computers perform computations in a completely different way from traditional computers. They are based on quantum mechanics, which simulates nature’s behavior on an atomic scale, sub-atomic scale, or at very low temperatures. Unlike traditional computers, the information in quantum computers is encoded in a physical system or a physical particle called a qubit.

Classical computers use binary codes of zero and one to represent information, where the value of one is represented by a higher electrical voltage relative to that of zero. Quantum computing, on the other hand, is based on the mind-bending concept that atomic particles can be in multiple states at the same time. Instead of analyzing one and zero sequentially, quantum computing uses ones, zeros, and “superpositions,” or overlaps of ones and zeros, to look at all the different combinations of data simultaneously. This feature, along with other quantum features, such as entanglement, give these computers the ability to perform calculations and solve certain problems more effectively.

As a result, quantum computing can deal with larger sets of variables while crunching the data exponentially quicker. Scientists believe quantum computing will revolutionize computation and have a significant impact on every field. Specifically, it will make communications more secure, and lead to revolutionary developments in biomedicine, defense, and energy-saving devices.

The desire to keep learning and researching is the main motivation for Watad’s choice in the field. “My parents always encouraged me to do what I love. Of course, there were other voices asking me what I would do with a physics degree. Would I, for instance, teach in high school? But I love physics and despite the general lack of respect for pure science as a profession, it is for me a way to gain meaningful and influential knowledge as well as a lot of potential in career development.” Today, at the age of 25, Watad does not know what the next stage will be for her. As far as she is concerned, though, she will at every stage of her life, “do the best I can and get tools for the next level.”