Technion to Award Honorary Doctorate to Pfizer CEO Dr. Albert Bourla for extraordinary achievement in developing a vaccine for COVID-19

The President of the Technion – Israel Institute of Technology, Professor Uri Sivan announced today that the Technion will award an honorary doctorate to Pfizer CEO and Chairman Dr. Albert Bourla, for his extraordinary achievement in leading the record time development of the novel vaccine against SARS-CoV-2, the virus that causes COVID-19. The vaccine, which is helping to end the coronavirus crisis, is expected to serve as a model for the development of a wide range of future mRNA-based treatments. 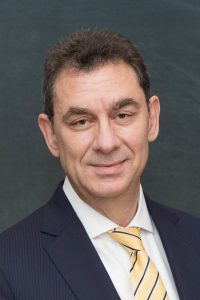 “As Chairman of the Board of Pfizer Inc., Dr. Bourla headed the trailblazing effort to develop a vaccine against the coronavirus,” explained Technion President Sivan. “In his 27 years with Pfizer, Dr. Bourla promoted multiple areas within the company, among them technological innovation. The development of the COVID-19 vaccine is an extraordinary biotechnological achievement that exemplifies the importance of science and multidisciplinary research. The vaccine, and similar ones, will bring healing to all of humanity and will rescue the world from the crisis that began at the end of 2019, with the epidemic outbreak. Dr. Bourla’s family history, as a son of Holocaust survivors from Thessaloniki, is a symbol of the remarkable vitality of the Jewish people, their liveliness, and their renewal capacity in the wake of the Holocaust.”

“I am moved by the news and honored to receive a degree from such an important and historical institution as the Technion,” Dr. Bourla said to President Sivan during a phone conversation informing him of being awarded the degree. “In my youth, I considered studying at the Technion; this is an emotional closure for me.”

Dr. Albert Bourla was born in Thessaloniki in 1961 to a Jewish family, part of which perished in the Holocaust. His family, who arrived in Greece from Spain following the Alhambra Decree, dealt in jewelry and diamonds, and their business spread across many countries. The Thessaloniki Jewish community, once the largest in Greece, had a population of approximately 80,000 in the 1930s. Approximately two-thirds of them perished in the Holocaust.

Dr. Bourla completed all of his academic degrees at the Aristotle University of Thessaloniki and holds a Ph.D. in veterinary medicine and reproductive biotechnology. In 1993 he joined Pfizer, one of the world’s leading biopharmaceutical companies, where he went on to hold a series of positions. He oversaw antibody development and served as Group President of Pfizer’s Global Vaccines, Oncology, and Consumer Healthcare business. In 2018 he was appointed Chief Operating Officer, and in 2020 he became the company’s Chief Executive Officer.

In recent years Dr. Bourla has led Pfizer in strengthening ties with technology companies and in adopting technologies such as artificial intelligence. At the beginning of 2020, following the global outbreak of the COVID-19 epidemic, he harnessed most of the company’s resources to develop a vaccine, meeting challenging schedules. Throughout the process, Dr. Bourla promised there would be no compromise with regard to the safety of the vaccine, and approval was obtained after an extensive study that included more than 40,000 subjects.

The honorary doctorate will be conferred on Dr. Bourla during the next annual Technion Board of Governors meeting in November 2021.