Almost everyone has witnessed the Coandă effect — which is when a jet of fluid follows a curved surface. An easy way to visualize the effect is to place the back of a spoon pointing vertically downwards under a water jet flowing from a faucet. What most people don’t know is that, more than a hundred years ago, Lord Rayleigh1 proved, theoretically, that the jet can be centrifugally unstable. In simple terms, this means that mini-tornadoes may be embedded in the jets with their funnels pointing in the jet direction. In the 1980s the critical conditions for their existence were determined theoretically2 but they remained elusive, yet to be observed experimentally. 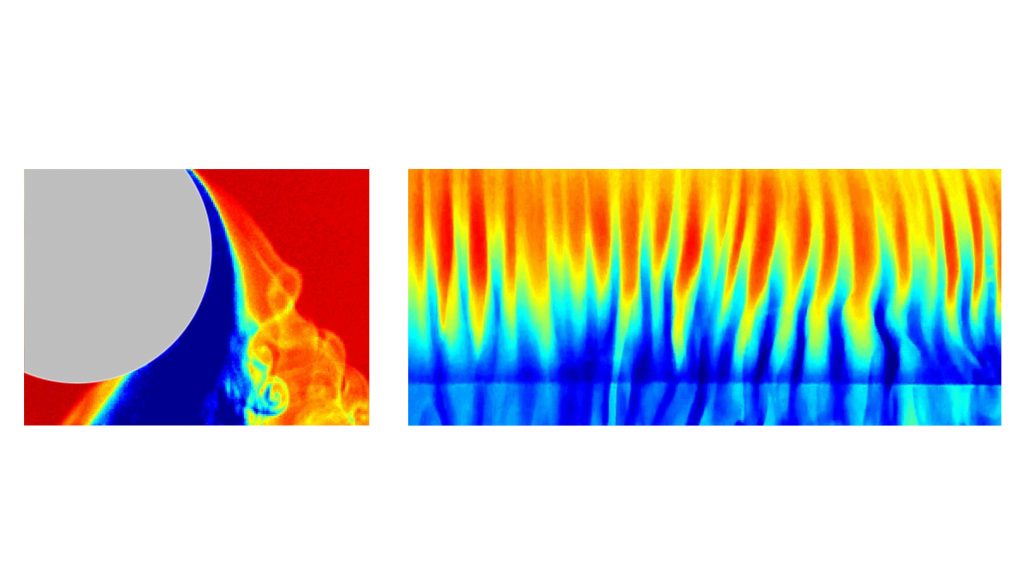 This all changed when Technion Ph.D. student, Lev Dunaevich, began studying the problem under the supervision of Professor David Greenblatt of the Faculty of Mechanical Engineering. By propelling a two-dimensional jet-stream over a circular cylinder they were able to visualize these stationary tornadoes for the first time (see image). In a Featured Article in the journal Physics of Fluids, Dunaevich and Prof. Greenblatt experimentally determined the critical conditions for the existence of the tornadoes, which corresponded remarkably well with theory. They also showed how the tornadoes lose their shape and become wavy, before breaking-down into incoherent turbulence. Formation of the tornadoes and their subsequent breakdown has a dramatic non-linear effect on the location at which the jet ultimately detaches from the surface.

Prof. Greenblatt was amazed that this instability had never been seen before in Coandă flows and suggested that it could be widespread in blood flow, and in medical devices such as ventilators. “The Coandă effect has long been suspected as the reason for unequal ventilation of the lungs in intubated patients and, with the prevalence of COVID-19, the discovery of this instability can play a decisive role in the design of more effective ventilators.” Prof Greenblatt also envisions the great potential for the design of microfluidic mixers, micro air vehicles, and electronics cooling systems. Using recently secured funding from the Israel Science Foundation, Dunaevich and Prof. Greenblatt are presently finding ways to manipulate the tornadoes artificially with the intention of controlling the Coandă effect and exploiting it for the design of medical devices, and for industrial applications.

Click here for the paper in Physics of Fluids