The International Biomedical Engineering Conference was held at the end of February at the Haifa Congress Center, led by the Israel Society for Medical and Biological Engineering (ISMBE) and sponsored by the IEEE – the Institute of Electrical and Electronics Engineers. 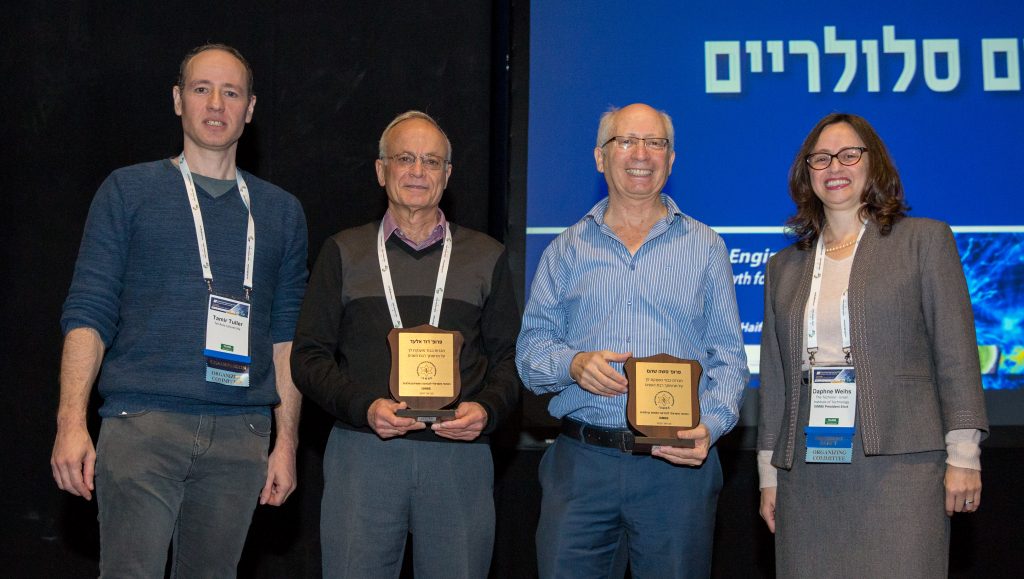 The event opened with the greetings of Conference Chair, Prof. Tamir Tuller of Tel Aviv University and Prof. Daphne Weihs, the new President of the ISMBE. The Deputy Mayor of Haifa Adv. David Etzioni and Dr. Galit Rand, the director of strategic planning and research at the Haifa Municipality also welcomed the participants. The opening lecture was given by Prof. Meital Zilberman of Tel Aviv University, the outgoing president of the Society, who spoke about natural polymers in biomedical applications.

Two new Honorary Members of the Society were announced at the conference:

Prof. Moshe Shoham, a member of the Technion’s Faculty of Mechanical Engineering. He established his first robotics lab at Columbia University, and after joining the Technion he established one of the world’s most advanced robotics labs.  Alongside his extensive research and teaching activities, Prof. Shoham is a serial entrepreneur who has led the founding of pioneering robotics companies including Mazor Robotics, which was acquired two years ago for $1.6 billion.  The company has developed an innovative brain and spinal surgery system.

Prof. David Elad, who completed all his academic degrees at the Technion and is currently a faculty member in the Department of Biomedical Engineering at Tel Aviv University’s Faculty of Engineering. He is a leading world expert in two fields: the respiratory system and the reproductive system. In recent years, he has been working on a revolutionary development in the second area: an artificial uterus that will allow for the expansion of scientific knowledge on the rooting of human embryos in the uterine wall and may even help women without a uterus.

Many diverse topics were discussed at the conference including characterization of Crohn’s disease, portable and deep ultrasound imaging, blood flow and oxygen monitoring in the placenta, a smart chip for the study of ALS muscular dystrophy, innovative technologies for gluing and sealing (damaged) tissue, packaging (microencapsulation) of pancreas cells, a platform for drug-choice for delivery to the brain, mechanobiology of cancer and wounds, artificial cells for drug delivery, and tissue engineering in spinal cord injury rehabilitation. The second plenary lecture was delivered by Prof. Ron Weiss of MIT in the USA, who spoke about synthetic biology in mammalian cells and its integration into developing solutions to medical problems.

This year, the tradition that was established last year continued – popular lectures on various wide topics in Biomedical Engineering were given in Hebrew, intended primarily for high school students. The popular session was attended by many hundreds of high schooler students and the general public and included the following lectures: Prof. Meital Zilberman (Tel Aviv University) on biomedical engineering – the relationship between engineering and medicine, curricula and industry in Israel; Prof. Natan Shaked (Tel Aviv) – the future of in vitro fertilization; Prof. Daphne Weihs (Technion) – the hard head of cancer cells: the relationship between mechanics and early diagnosis and prediction; Prof. Moshe Brand (Ariel) – stents and arteries, war and peace; Prof. Tamir Tuller (Tel Aviv) – the next revolution in human evolution: intracellular engineering of genetic material; Prof. Orit Shefi (Bar Ilan) – engineering principles in the nervous system – how does it help in reconstruction?; and Mr. Zohar Gendler (CEO of NGT3) – success factors and failure of medical startups – examples from personal experience.

The ISMBE conference serves as a meeting of academic researchers across the wide spectrum of the biomedical engineering field in Israel and the world and connects researchers and students from all the universities, physicians, healthcare professionals, and Israeli and international industry. At the conference, academic researchers presented the most innovative scientific and technological developments, and the industry participants – from established companies and startups from Israel and around the world – presented booths, posters, and lectures.  High school students, undergraduate students, and graduate students were exposed to cutting edge research in the wide field of biomedical engineering and also presented the research works in which they participated.