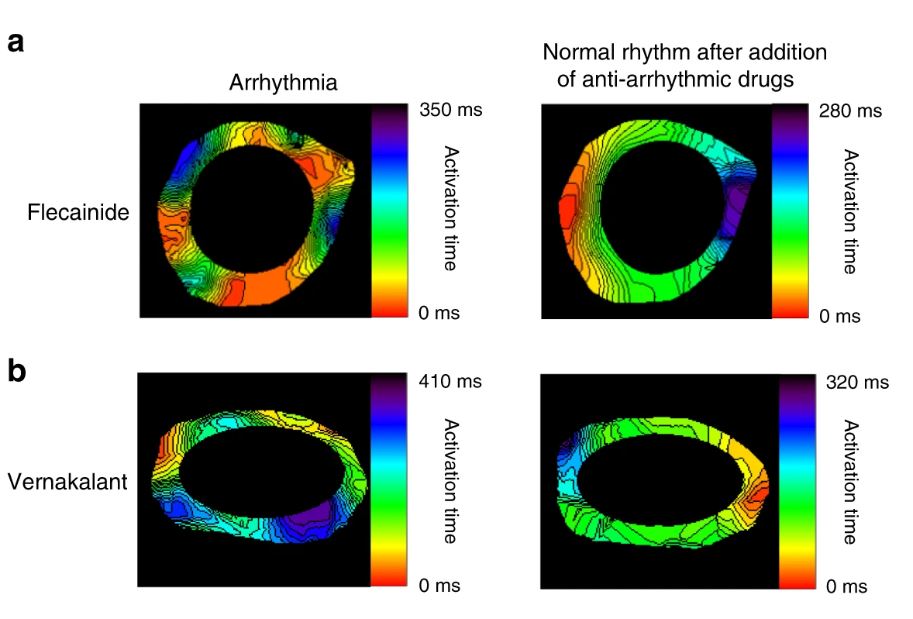 Creating a model of atrial fibrillation in the engineered atrial tissue, and mapping the electrical activity in this model in the left column, which shows a disorder resulting from “rotor formation,” and in the right column, the halting of the arrhythmia and return to normal rhythm through the use of existing and new drugs.

The tissues, which simulate heart tissues of the atrium (auricle, or the upper chamber of the heart through which blood enters the ventricles) or the ventricles, will serve in the near future for personalizing medications for cardiac patients and developing new drugs to treat them. In the more distant future, the technology is expected to be utilized in the production of implants for damaged areas in the auricles and ventricles. 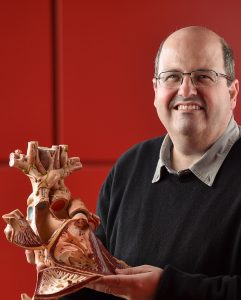 To demonstrate the inherent potential of this technology, the researchers developed a model of arrhythmia in the engineered atrial tissue. The model simulates the most common type of irregular heartbeat – atrial fibrillation – and allows the examination of the effect of relevant drugs in preventing or stopping the arrhythmia after it has begun.

The atrial and ventricular tissue models displayed unique properties in terms of gene and protein expression patterns, electrical activity, and contractile properties, which were similar to their corresponding chambers in the in vivo heart.  “Separation between these two types of tissues is important because drugs that can improve the function of atrial cells and thus prevent arrhythmias in the auricle are liable to cause harm to ventricular cell function and even induce ventricular arrhythmias,” explained lead researcher Professor Lior Gepstein of the Technion – Israel Institute of Technology. “For example, for atrial fibrillation – the most common type of irregular heartbeat that is also responsible for more than a quarter of all strokes – we want to influence the electrical activity of the atrial cells using drugs, without affecting the function of the ventricular tissue. Now that we can individually manufacture the cells of the atrium and the ventricle, we can test each drug for each cell type separately.”

The unique research tools developed in the present study – engineered atrial and ventricular tissue, and innovative methods to study them – could revolutionize the field of drug development as well as the ability to personally tailor drugs to the patient from which the tissue was produced (personalized medicine). In the long run, Prof. Gepstein hopes, “we will be able to use similar methods to also produce heart tissue for transplants in cardiac patients. These tissues will be well received because they are based on the genetic characteristics of the patient him/herself.

The research, which was published in Nature Communications, was led by Prof. Gepstein, head of the Sohnis Family Research Laboratory for Cardiac Electrophysiology and Regenerative Medicine at the Technion’s Rappaport Faculty of Medicine and chief of cardiology at Rambam Health Care Center; together with doctoral candidate Idit Goldfracht. The work was conducted as part of a collaboration between the Technion and the laboratory of Professor Gordon Keller, who is the director of the McEwen Stem Cell Institute. 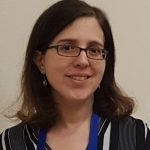 The present article complements a previous study from Prof. Gepstein’s lab that was recently published in the Journal of the American College of Cardiology. In that article, a unique, two-dimensional model of cardiac tissue was derived from a patient-specific human stem-cell source, allowing to model and study complex arrhythmias in inherited cardiac disorders. In this work, performed by Dr. Rami Shinnawi and Naim Shaheen of Prof. Gepstein’s research group, this unique model was used for the study of a life-threatening inherited arrhythmogenic syndrome called the short QT syndrome. This syndrome can lead to a variety of arrhythmias and even sudden death in young patients. The model presented by Prof. Gepstein’s team makes it possible to reconstruct and investigate the mechanisms underlying arrhythmias in this disease, test different treatments in the lab and choose in advance the optimal treatment for the specific patient. This work also demonstrated the possibility of using genetic editing (CRISPR) to correct the mutation leading to arrhythmia in this disease, providing proof-of-concept evidence for the potential of this approach for treating genetic disorders in the future.

The 2D and 3D models described in these two papers are based on the production of cardiac cells using human-induced, pluripotent stem-cell technology (hiPSCs). This technology was initially developed by Japanese researcher Shinya Yamanaka, the co-recipient of the Nobel Laureate in Physiology or Medicine for 2012.

One of the clear advantages of this technology is the ability to produce cells and tissues for transplantation from the patient’s own cells – which prevents the rejection problem when using cells from another person. In addition, the process also allows for the creation of patient-specific models in the lab that can be used to individualize patient-specific therapies and to derive unique platforms for drug development and drug testing.

The process, in a basic description, begins with collecting adult cells – skin or blood cells, for example – from the patient. These cells are then reprogrammed in a sort of “cellular time tunnel” and returned to the state of the earliest cells in the body, resembling embryonic stem cells. The resulting hiPSCs are then guided in the lab to differentiate into the desired cell types. In Prof. Gepstein’s and Prof. Keller’s labs, which focus on the cultivation of heart tissue, the researchers use different growth factors to direct the differentiation of stem cells into cardiac cells, and as illustrated in the last article, even into different types of heart cells – ventricular cells, atrial cells, and pacemaker cells.

For the full study in Nature Communications, press here

The process of creating the engineered atrial and ventricular tissues. The heart cells (ventricular or atrial) cells derived from the stem cells are mixed with collagen to form the engineered tissue within a designated template. The resulting tissue undergoes mechanical stretching, and finally, the resulting tissue alternately contracts and expands. In this case, the researchers developed a ring-shaped tissue.