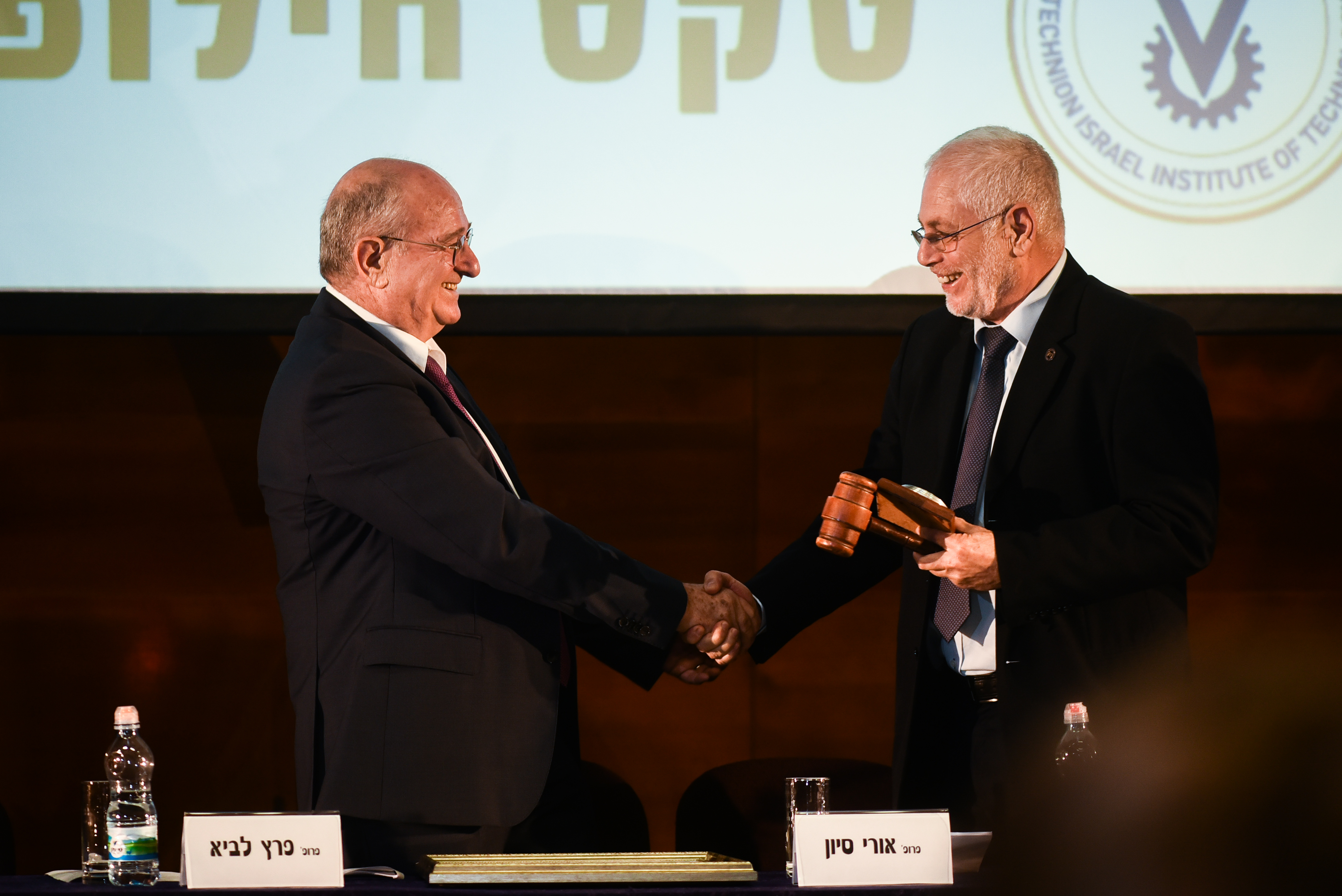 Technion President Prof. Uri Sivan, who took office today: “Universities will have to reinvent themselves.”

In his remarks, Prof. Sivan spoke about his parents, who immigrated to Israel from Poland in 1936 to study at Technion after universities all over Europe closed their doors to Jews. He said that his appointment as president closes a personal circle for him. He continued, “The Technion today is stronger than ever, and we must leverage this to implement far-reaching reforms in our research structure, curricula, teaching methodologies, and collaboration with industry. The great challenges of the 21st century – human health, energy, environment, sustainability, advanced manufacturing, and education – require a multifaceted approach. Our success will be measured by our ability to create the necessary synergy to meet the challenges facing humanity. Education will change dramatically. All knowledge is at our fingertips, and universities will have to reinvent themselves in a world where information is accessible to all and updated exponentially.” He added, “The universal values of equality, pluralism, tolerance, freedom of speech, integrity, and the pursuit of truth, which are constantly challenged around the globe, are the breath of academic life and should be defended.”

Education Minister Rabbi Rafi Peretz said at the ceremony, ” I wish to thank the people of the Technion for all that they have done for the State of Israel. Our future is dependent on research and development in the exact sciences, technology, medicine, and architecture. You are the engine that drives all of this. Especially in these days of uncertainty, it is tremendously important to have islands of stability, excellence and continuity like the Technion.

Outgoing Technion President Prof. Peretz Lavie said, “I set myself three main goals when I entered office: massive recruitment of outstanding young faculty, dramatic improvement in the quality of teaching and attitude towards students, and turning the Technion into a global university. In the global context, we have expanded the Technion’s influence, and there is no doubt that the highlights were the establishment of the two new campuses in China and New York. In terms of improvement of teaching, the Technion has jumped from last place to first place among Israeli universities in student satisfaction. We also had tremendous success in recruiting new faculty members: Some 270 new faculty members joined the Technion ranks over the past decade, and they have made Technion younger and even more excellent. This is evident in the quantity and quality of scientific articles, research grants and prestigious awards.”

Nobel Laureate in Chemistry, Distinguished Prof. Aaron Ciechanover said that, “The Technion may not be the best university in the world, but it is the institution to which the State of Israel owes its very existence. The Technion is responsible for the two most important pillars on which the state stands: security and economy. The Technion must continue to lead in science and technology while also addressing the ethical aspects, since there is no technological invention without ethical consequences.”

Haifa Mayor Dr. Einat Kalisch-Rotem thanked Prof. Lavie for his work on behalf of the city of Haifa and its residents and presented him with a certificate of appreciation which reads: “In appreciation of your exceptional and longstanding activity in promoting Technion as the leading institution in its field in Israel and in the world.”

Prof. Sivan, 64, a resident of Haifa, is married and the father of three, and served as a pilot in the Israeli Air Force. In 1991 he joined the Faculty of Physics at Technion and is holder of the Bertoldo Badler Chair. His research over the years has covered a wide range of fields including quantum mesoscopic physics and the harnessing of molecular and cellular biology for the self-assembly of miniature electronic devices. Prof. Sivan has held a number of leadership positions both at Technion and on the national level.  He is the founding director of the Russell Berrie Nanotechnology Research Institute (RBNI), which he headed between 2005 and 2010. More recently Prof. Sivan headed the National Advisory Committee for Quantum Science and Technology.