Loss of identity is characteristic of old age, and likely perturbation to newly discovered mechanism is involved in neurodegenerative and other aging-related diseases including diabetes and cancer 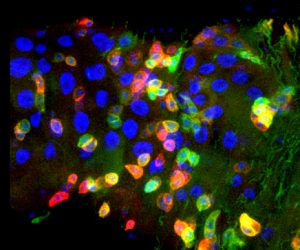 Researchers in the Rappaport Faculty of Medicine at the Technion–Israel Institute of Technology discovered a new mechanism that supervises the identity of mature cells. Maintaining cellular identity is essential for the physiological functioning of the cell, the tissue, and the survival of the living creature. The research, published recently in eLife magazine,  was conducted by Professor Amir Orian, Dr. Naama Flint Brodsly, Dr. Olga Boico, Adi Shafat, and Eliya Bitman-Lotan.

The study focused on enterocytes, the primary mature (differentiated) cells in the inner wall of the small intestine in the fermentation fly model (Drosophila). The rapid aging of the Drosophila flies – they are “old” at 2-3 weeks – allows researchers to trace aging-related processes relatively quickly. Moreover, the cellular structure of the fly’s gut is relatively simple, highly similar to the human gut, and therefore advantageous to study.

One hallmark of multicellular organisms is the differentiation of stem cells to give rise to differentiated cells of the body – skin cells, bone cells, intestinal cells, etc.. As a result, the stem cells are a sort of “factory” for producing assorted cells. How stems cells differentiate is an issue of study for many research groups around the world. The Technion research group, on the other hand, examined what happens after differentiation. They focused on how mature cells safeguard their identity, for example, how enterocytes retain their identity as enterocytes.

“It turns out that the preservation of cellular identity is not a default option,” said Prof. Orian. “The fact that a gut cell does not at times become a skin cell, for example, is not self-evident. Safeguarding the differentiated/mature state requires constant effort by active molecular mechanisms. It’s a little like in a human relationship; it is not enough to start.  You also need to work to keep the relationship functioning.”

The researchers explain that without strict control over the preservation of cellular identity, the gene system required for the designated cell type will cease to manifest itself, and irrelevant programs will manifest out of place (e.g. genes of the heart will manifest in intestinal cells). These disruptions will impair the tissue’s ability to perform its physiological tasks. Moreover, loss of cell identity is accompanied by processes such as pathological de-differentiation, which makes differentiated cell turn into new cell types and may lead to conditions such as cancer and progeria-like diseases, which are characterized by accelerated aging and caused by mutations in the nuclear Lamin protein. As such, the discovery of the mechanism that maintains the cellular identity of mature cells is of great interest.

The Orian Lab discovered that two of the main factors in preserving cellular identity are the transcription factor Hey and the proteins at the vicinity of the cell nucleus envelope termed Nuclear Lamins.

Transcription factors are the main players in the genetic control mechanism. Their effect is focused on the translation of genetic information from DNA to mRNA, the molecule that contains the information needed to build the proteins in the cell. Their proper functioning is essential for the proper creation of proteins as well as for the proper functioning of the organism as a whole. The researchers found that the transcription factor Hey promotes the expression of the unique differentiated Lamin gene in the differentiated enterocyte. At the same time, Hey inhibits the expression of the stem cell-related Lamin gene. In the differentiated cell, Hey together with the mature Lamin shapes the structure of the nucleus generating a unique organization to the mature enterocyte cell nucleus. This design is required for the continuous control of the differentiated cell identity; in aging cells, the level of Hey decreases, leading to loss the unique structure of the nucleus, and thereby loss of cell identity and physiological impartment of the gut tissue.

Based on this understanding, the researchers demonstrated that genetic manipulation leading to the acute deficiency of Hey or Lamin in enterocytes leads to premature aging of the intestinal tissue and premature death of young files, similar to the physiological process that occurs in old age. In contrast, strengthening the expression of the Hey gene in enterocytes prevented the appearance of defects related to the aging of gut cells, thereby improving the functioning of the gut tissue and slowing its aging.

This discovery is a breakthrough since it identifies key supervisors and new mechanisms that safeguard the identity of mature cells. The translation of these findings into the cancer arena and the aging processes has the potential to be the basis for improving treatments for age-related diseases. Future pharmacological inhibition of key supervisors will also enable a significant improvement in stem cell rep-programing and engineering required for the repair of various medical disruptions.

The research was supported by a grant from the Israel Science Foundation (739/15), the Rappaport Research Institute for Medical Research, and the Ruth Marandy-Flinkman Cancer Research Fund.