The PneuMonitor team developed a system for monitoring life-threatening situations on the battlefield and won first place and a NIS 50,000 prize

PneuMonitor is the team that won the NIS 50,000 first-place prize at t-hack – the largest student hackathon in Israel, which was held at Technion. The four group members: Noy Mark, Anat Lyubin Haimov, Rafi Gerasi, and Eran Sasha developed an innovative technology that detects a dangerous medical condition known as pneumothorax also known as a collapsed lung. 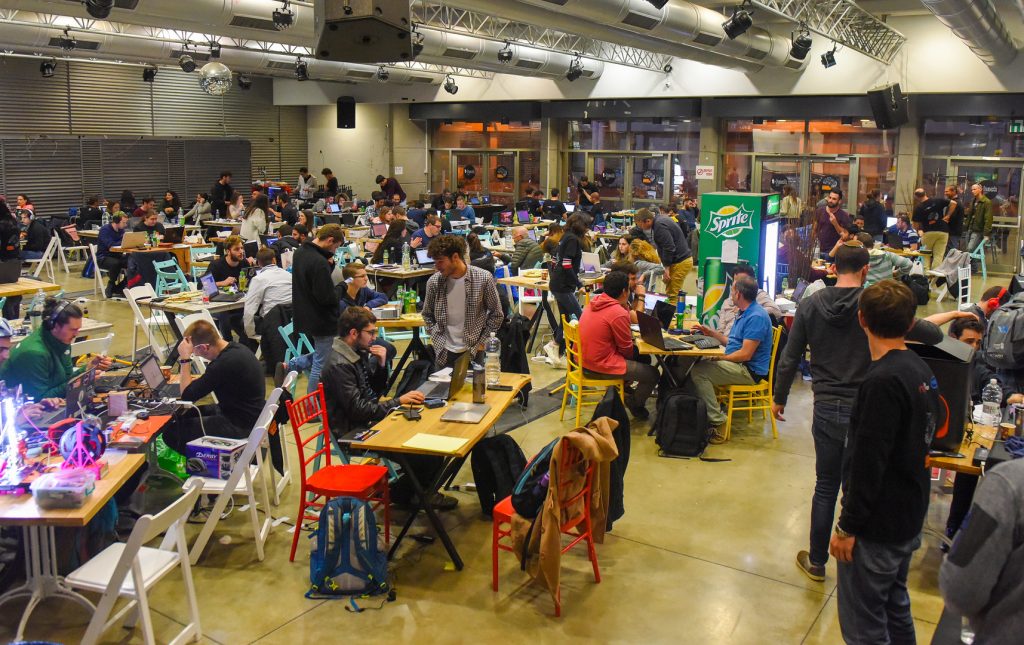 More than 600 students throughout the country and across 150 teams participated in t-hack, winning cumulative prizes totaling NIS 100,000. In the final stage of the hackathon, 10 groups with outstanding ideas presented their projects to a panel of judges which included, Prof. Adam Shwartz,  Technion’s Senior Executive Vice President ; Dr. Irit Idan, Executive Vice President of Research and Development at Rafael Advanced Defense Systems ; Dov Moran, a serial entrepreneur, investor and inventor of the disk-on-key; and Eden Shochat, a venture capitalist, equal partner at Aleph VC, and  co-founder of Face.com, a world leader in facial recognition for social networks.

T-hack, initiated by Technion’s Student Union (ASAT) and t-hub, Technion’s new Entrepreneurship and Innovation Center, focuses on three main areas:  autonomous systems, smart cities and accident and emergency medicine. Leading entrepreneurs from Israel’s industry and participating companies served as mentors for the students. The event was funded by Technion and supported by Intel, Facebook, Noble Energy and other technology companies.

At the opening of the event, Prof. Adam Shwartz, said that:

“The event was born out of the understanding that entrepreneurship is a worldview and a way of life, and   Technion must provide entrepreneurial education to its students.” Prof. Schwartz is also the Chairman of t-hub, Technion’s Entrepreneurship and Innovation Center, which recently won a NIS 10 million grant from the Council for Higher Education. He added, “We are committed to providing all interested students with the tools to solve engineering, technological and scientific challenges during their professional careers, whether they work in academia, start-up companies, industrial, civilian or security companies, or in any other companies that benefit the public.” 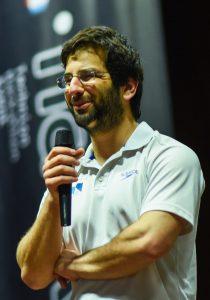 Amir David Nissan Cohen, ASAT’s Chairman told the participants that, “In just 30 hours you will be required to solve difficult problems in a creative way in one of three fields: smart cities, autonomous transportation, and emergency medicine. We expect interesting solutions to interesting problems, and you will be judged by your measure of originality, creativity, business applicability, and presentation skills.”

The keynote speech at the event, “How to Kill Innovation” was given by Technion graduate Mooly (Shmuel) Eden, former President of Intel Israel and Senior VP at Intel Corporation. In 2012, Eden was chosen by Forbes magazine as one of the ten most brilliant minds in the field of technology. In his lecture, Eden said that, “The technological revolution does not pertain only to the technological world, but permeates to all areas of life; the Arab Spring, the rise of USA President Donald Trump, the success and crash of ISIS- all of these were heavily influenced by technology – and in this crazy world, our lives as engineers are less comfortable and pleasant.  Anyone who does not run fast enough ceases to be relevant. We must be innovative, that is to try the unknown, to challenge the status quo. The fear of change, success, lack of competition and the saying ‘if it ain’t broke don’t fix it’ are things that kill innovation.” 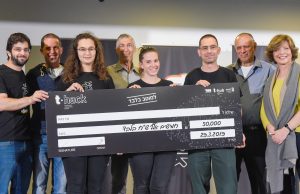 1st Place Winners: PneuMonitor team members with the judges in the competition

The students in the winning team, PneuMonitor, all serve in IDF’s Medical Corps. Noy Mark and Anat Lyubin Haimov are graduates of the Faculty of Bio-Medical Engineering at Technion, and Mark is currently studying towards her MSc under the supervision of the faculty’s Prof. Emeritus Dan Adam. Eran Sasha is a student in the Mathematics Department at Tel Aviv University and Rafi Gerasi is an electrical engineer from the University of Ariel and holds an MHA in Health Systems Management from Ben Gurion University.

The team developed an innovative technology for the rapid identification of pneumothorax – collapsed lung. This is the second leading cause of preventable death on the battlefield. In this medical condition, air penetrates into the flora – the two-layer membrane surrounding the lung – and interferes with the normal expansion of the lung and the transfer of oxygen to the blood. This can lead to tracheal obstruction and heart problems, and early diagnosis may save lives.

The problem is that pneumothorax does not express external symptoms, especially in its early stages, and therefore it is difficult to identify via manual examination. The device developed by the team is based on an automatic analysis of the patient’s breathing sounds, filtering out background noises. The sounds are obtained from a simple stethoscope and are analyzed by an algorithm developed by the team. The result: a small, easy and automatic tool for the immediate objective detection of pneumothorax. This means that the device can be used by paramedics on the field. 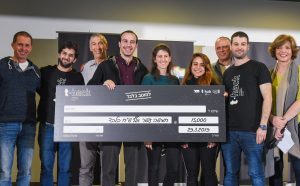 2nd Place Winners: ICPupil with the judges in the competition

In second place, with a NIS 15,000 prize, was ICPupil. The team developed a system for non-invasive monitoring of a patient’s neurological status and warning of dangerous situations. Using image processing and algorithmics, the team members produce a neurological score that accompanies the patient prior to and during a stay in the emergency room, and even at home. The score provides the caregiver critical information about the patient’s condition in real time.

All of the team members are Technion students. Roy Francis is a doctoral student at the Department of Computer Science, Yehuda Wexler and Yonatan Prat are completing a dual degree in medicine and biomedical engineering, and Shani Glatstein and Michal Landesberg completed a double bachelor’s degree and are MD PhD students at Technion. 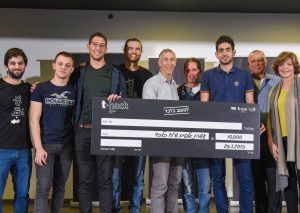 3rd Place winners: Cyclmate team members, with the judges in the competition

In third place, with a NIS 10,000 prize was Cyclmate. The team developed a smart electronic system designed to prevent children and youth from riding a bicycle without a helmet. The team members are Christian Shakur, a student at Technion’s e Viterbi Faculty of Electrical Engineering ; Nir Altman, Co-Founder of Cyberty AB, a  business cyber security company; Tal Shahnovsky , a student at Haifa University’s Department of Computer Science ‘Etgar’ Program and a researcher at the university’s Robotics and Big Data Laboratory (RBD); Benny Rein is a graduate of Tel Aviv University’s School of Electrical Engineering  ; and George Kasayev, is a graduate student at the University of Haifa’s Department of Computer Science. 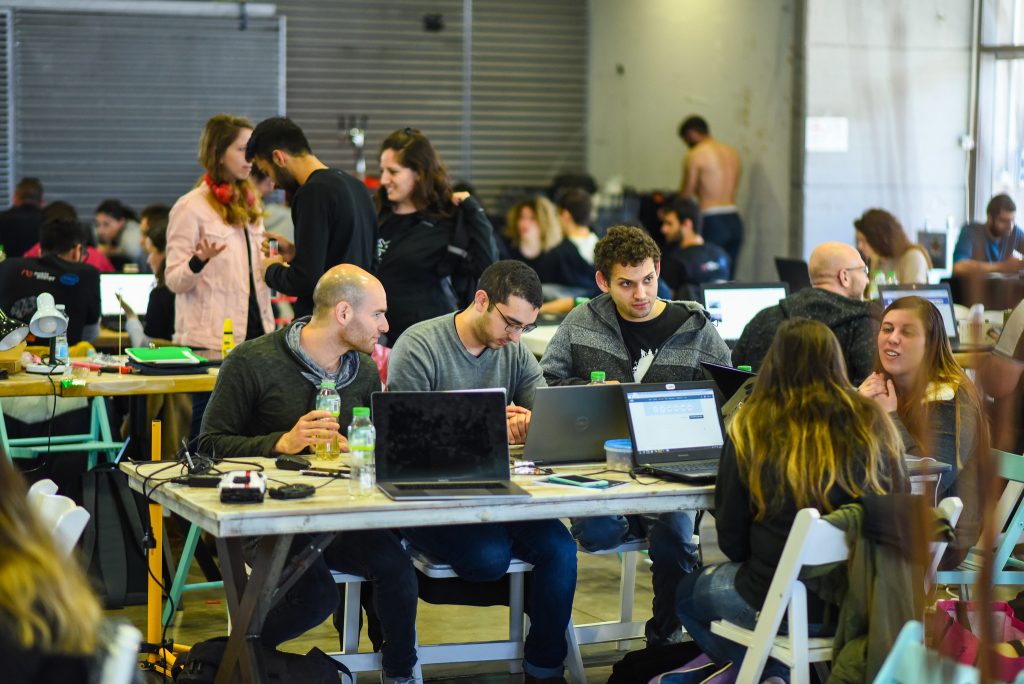