The 10th Robotraffic Competition, named for Nadav Shoham, took place on 21st March at Technion, with the participation of a thousand students from around the world with dozens of autonomous cars.

For the 10th consecutive year, the Robotraffic Competition named for Nadav Shoham was hosted at Technion – Israel Institute of Technology. The contest invites participants to build autonomous vehicles for an environment that simulates a city.

This year, some 1,000 students participated in the competition; from countries that included Israel, the United States, Argentina, Russia, Mexico, and Ukraine.

The Nadav Shoham Robotraffic contest is a joint project of the Technion’s Leumi Robotics Center, World ORT, Kadima Mada, and the World Zionist Organization, along with Ytek and Eytam Robotics. The competition strives to provide students with the knowledge and skills associated with safe driving in order to lower the number of young drivers involved in traffic accidents. The students build robots that are in essence autonomous vehicles required to perform tasks on a simulated road. The most challenging part of the contest, aimed at high school students, involved elements of safe driving, advanced safety methods, speed, general road safety, driving laws, and design the vehicles using SolidWorks. This year another challenge was added only for the Highschool students: driving in a defined trajectory without markings on the ground

The competition was hosted by Head of the Technion’s Leumi Robotics Center Prof. Moshe Shoham,  along with Director of the Center Dr. Evgeny Korchnoy. 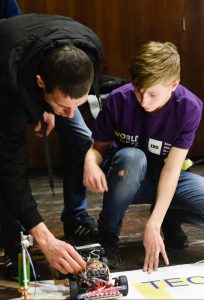 All hands on deck, at the 2019 Nadav Shoham Robotraffic Competition

“The first competition that was held ten years ago, brought together groups from five schools. Now, we have about 100 teams in an international competition, and in recent years there have also been regional competitions in Russia and in Ukraine,” said Prof. Shoham, “Tens of thousands of students have already passed through the program and many have gone on to [study at] the Technion and have continued in the robotics industry.  This is your natural route and I hope to see you here in the future.”

Tova Shoham, the wife of Prof. Shoham, congratulated the participants and wished them success. She told the students about her son, Nadav Shoham after whom the competition is named. “Nadav was an engineer from birth, she said. He put together a lot of things, such as a bicycle with a lawnmower engine, and his friends called him ‘Nadav hands of gold’. He naturally came to the Faculty of Mechanical Engineering at the Technion, and here, in parallel to his studies, he continued to volunteer to help disabled children, as he did as a teenager. He came to the Robotraffic  Competitions and enjoyed the enthusiasm, dedication and investment of the various teams in building the robots.” Nadav was tragically killed in an avalanche on the Annapurna ridge in 2014.

“I am pleased to see the heads of three Councils here- Beit Je’an, Majar, and Jat – whose presence is important here. The Technion has been open and will continue to be open to all sectors and to all populations,” said Vice President for External Relations and Resource Development Prof. Boaz Golany. 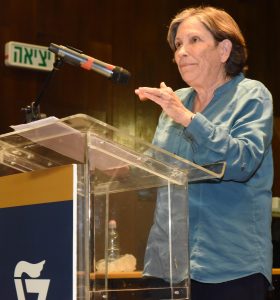 The Dean of the Faculty of Mechanical Engineering Prof. Oleg Gendelman addressed the audience in Hebrew, English and Russian, saying that”: “Robots are used today in many fields. In order to design a smart robot, you need to know mathematics, chemistry, physics, engineering and more. This competition is the beginning of an interesting way for you, and I hope that you will continue and succeed on this path.”

Shmuel Cohen, director of scientific programs at Kadima Mada said that: “Israeli hi-tech has become what it is thanks to good technological education, and our job is to prepare you to be the best engineers in the world. My relationship with Dr. Korchnoy and Prof. Shoham extends all through the year, and we are proud to support the program.”

Dr. Nadav Betzer of the Education Ministry thanked the Technion staff and said: “Robotraffic was born here at the Technion as an Israeli competition and has become an international one.  The tools you receive here will stay with you and will accompany you in the future.”