Researchers at Israel’s Technion have created a mechanical way to make light go one way (and one way only) at nanoscales. It’s the first of its kind optical “isolator,” which might prove useful in quantum computing and optical computing, where you want to precisely control the direction and “size” of the light signals that move from chip to chip and carry the information of the computational process.

HAIFA, ISRAEL (July 12, 2018) – Researchers at the Technion-Israel Institute of Technology have constructed a first of its kind optic isolator, based on resonance of light waves on a rapidly rotating glass sphere.  This is the first photonic device in which light advancing in opposite directions moves at different speeds. 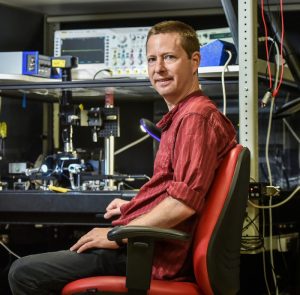 “Essentially, we developed a very efficient photonic isolator, which can isolate 99.6% of the light,” said research team leader Professor Tal Carmon. “Namely, if we sent 1,000 light particles, the device will effectively isolate 996 photons and will miss only 4. Such isolation efficiency is necessary for applications that include quantum optics communication devices and building high-powered lasers. The isolator we developed here fulfills several additional requirements: it also works well when light from both opposing directions is simultaneously perceived, it is compatible with standard optical-fiber technology, it can be scaled down and it does not change the color of the light.”

Just as swimming downstream is faster than swimming upstream and riding a bicycle with the wind behind you is faster than riding against the wind, light also changes its speed with “tailwinds” or “counter-flow”, in response to the medium in which it is moving. The speed of light in glass, for instance, is slower than its speed in air. Also, two beams of light advancing in opposite directions in glass, or any other material, will advance at the same speed.

This effect was already described in 1849 by the French scientist Armond Fizeau, who showed, that like a swimmer in a river, the speed of light down a current is faster than light going up a current. Fizeau’s discovery had a significant impact on the development of Einstein’s theory of Special Relativity.

The Fizeau drag may lead to significant applications in optics and computers, as its unique ability to differentiate between the speeds of light for counter-propagating beams can generate an optic isolator – a device into which light entering on one side is blocked, while the light entering from another side is transmitted. Until now, a device in which opposing light beams advance at different speeds, had not be constructed. 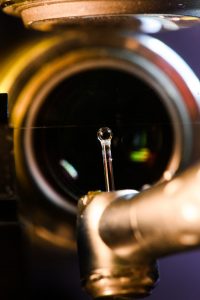 But now, for the first time, Technion researchers have succeeded in constructing such a device. The spherical optic device rotates at a high speed. Light beams are delivered into it from opposite directions via a nearby tapered fiber. The light approaching from the right moves along the circumference of the ball, in the direction of the rotation of the sphere, while the light approaching from the left turns opposite the direction of the rotation and therefore moves at a slower speed.

The novel device constitutes an optic isolator – it transmits light approaching from the left and turns off light coming from the right. Another effect that is relevant here is resonance. Just like a musical instrument that resonates at a specific frequency, light circumferentially circulating in the sphere resonantly echoes. Yet, the different speeds for counter-circulating light forces these counter-circulating light to have different colors. This way, light entering from one side

echoes inside the sphere while circulating thousands of times in the sphere, until it is absorbed. In contrast, light entering from the opposing side of the isolator is nonresonating and hence passes through the device practically undisturbed. In other words, the light moving with the device, resonates and is shut off, while the light moving against the device is transmitted and continues on”.

Professor Carmon noted that the device was constructed at the Technion glass blowing workshop. It was constructed from a glass rod whose tip was melted to a 1 millimeter-radius ball. The light enters the isolator from both sides of a standard optical fiber, tapered at the vicinity of the sphere to a diameter 100-time smaller than that of a hair, and positioned several nanometers away from the sphere. The sphere, which serves as the resonator, rotates at an ultra-fast speed – the tip of the ball moves at a speed of 300 kph – and the light coming from the fiber rotates within it thousands of times.

One of the engineering challenges the research group faced was maintaining the ultra-short distance between the fiber – via which light is provided – and the spherical resonator constant.

“Maintaining an accurate distance is a true challenge, even when the device is not moving, and is an enormous challenge when the sphere is rotating at such a high speed,” said Prof. Carmon. “Therefore, we sought a means of forcing the fiber to move together with the sphere, despite the fact that the fiber and sphere are not connected.  We finally achieved this by designing the fiber to float on the wind generated by the rotation of the sphere. In this way, if the device wobbles – which it does due to the rapid rotation – the fiber will wobble with it and the distance between them will be preserved. In fact, the fiber is actually flying above the rotating sphere at a constant and self-alighted nano-elevation”

The photo shows the fiber (the empty circle), the tip of the rotating sphere (at the bottom, in grey), and the flow of wind between them, upon which the fiber floats. The fiber floats above the sphere while maintaining a distance of several tens of nanometers.

Professor Carmon hopes this nano-seperated paves a path toward a novel type of mechanical device based on relatively unexplored forces that dominates at nano-scale separation. 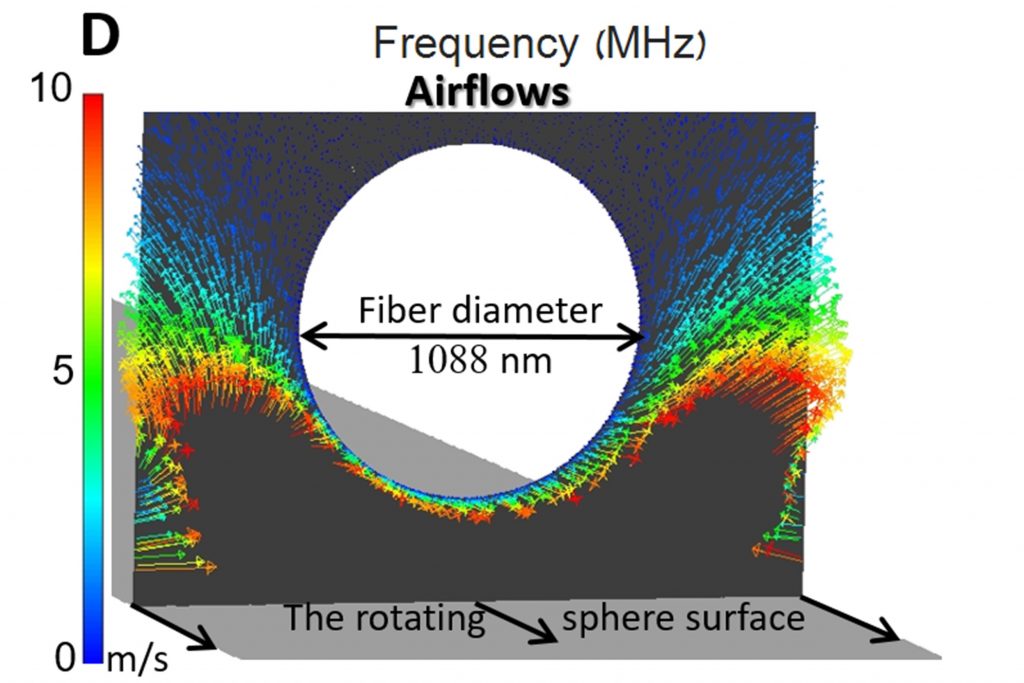 This illustration shows the fiber (the empty circle), the tip of the rotating sphere (at the bottom, in grey), and the flow of wind between them, upon which the fiber floats. The fiber floats above the sphere while maintaining a distance of several tens of nanometers.

“The forces acting at such distances include Casimir and Van der Waals forces – very strong forces originating from quantum effects, which, to date, have barely been exploited in mechanical devices, in general, and in mechanical oscillators, in particular,” he said. “We recently demonstrated, for the first time, lasers in which water waves mediate laser emission; and also, for the first time, micro-lasers where sound mediates laser emission.”

In the future, the researchers may be able to generate such lasers that are based on vibrations where the restoring force is Casimir or Van der Waals. Using their self-aligned nano separation method might also allow micro electro mechanical devices [MEMS] where Casimir and Van der Waals forces will be used.

This work was led by Professor Carmon, and conducted by his research team and his collaborators at the College of Optics and Photonics (CEOL) at the University of Michigan and at Hunan Normal University. The experiment at the Technion was conducted by Rafi Dahan, who was a Master’s student at the time, and Shai Maayani, then a doctoral candidate. Dr. Maayani is currently a postdoctoral fellow at MIT, where he is developing novel optic fibers under the guidance of Professor Joel Fink, a Technion alumnus. Dr. Maayani chose this research discipline, which was categorized as a strategic need for Israel, with the goal of returning to Israel after his postdoc for a faculty position. Professor Carmon emphasizes that the five first authors are Technion Mechanical Engineering faculty, including Yuri Kligerman and Eduard Moses, who performed the computations.

This study was supported by the I-CORE and “Circle of Light” Excellence Centers and by the Ministry of Science, Technology and Space.