Researchers in the Technion-Israel Institute of Technology Faculty of Biology have unearthed a new role of the caspase-3 protein in organ size determination. Their discovery could pave the way for novel therapeutic approaches in regenerative medicine and tumor therapy. This research was published as a cover story in Molecular Cell.

HAIFA, ISRAEL (July 27, 2018) – Scientists have long known that organ size is shaped by many factors, including the size of each cell, proliferation, cell differentiation, death, and, of course, the total number of cells. However, the molecular mechanisms directly regulating organ size had until now remained elusive, setting the stage for the current research directed by Assistant Professor Yaron Fuchs and led by Dr. Yahav Yosefzon. 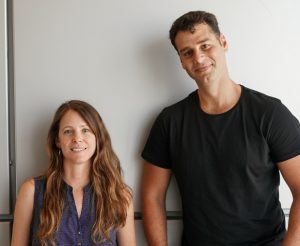 The Technion researchers discovered a previously unknown molecular mechanism that regulates the size of sebaceous glands in the skin. The skin is the largest organ in the human body, weighing approximately 9 kg (almost 20 lbs.) in adults and with an overall area of approximately 2 m2 (21.5 square feet). It is composed of an epidermis (the outer layer) and the dermis (the lower layer). The sebaceous glands are located in the epidermis, where they produce and secrete an oily substance (sebum) that protects the skin and the hairs covering it. Since sebaceous gland abnormalities can lead to acne and cancer development, there is a great need to understand the mechanisms responsible for their normal development and size.

The present study focused on the caspase-3 protein. Caspase-3 is considered a key player in apoptosis, a form of programmed cell death where dysfunctional cells “commit suicide,” which is essential for preventing the emergence of cancer and ensuring organismal survival. Caspase-3 functions by cleaving other vital proteins to execute cell destruction.

The Technion researchers found that, in contrast to the accepted dogma, caspase-3 does not induce apoptosis, but rather, leads to cell proliferation and thereby influences sebaceous gland size. Therefore they sought to elucidate the molecular mechanism by which Caspase-3 regulates cell expansion and organ size.

One major protein that governs these processes is the YAP protein. YAP is a transcription factor, which drives cell proliferation when it gains access to the cell nucleus. It is therefore very tightly regulated, in order to avoid uncontrolled cell division, which can lead to the development of cancer. To prevent it from entering the nucleus, YAP is anchored to the cell membrane by the a-catenin protein. The present work discovered that caspase-3 can cleave a-catenin, thereby liberating YAP from the membrane, enabling it to translocate to the cell nucleus and promote cell division. 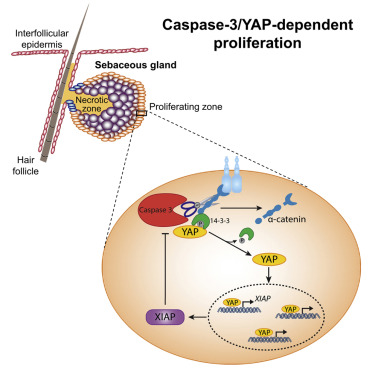 This discovery is particularly important as it sheds light on the common cancer treatments, including radiation and chemotherapy, which intentionally accelerate caspase-3 activity to execute tumor cell apoptosis. “Our discovery has various potential applications, including in hindering cancer and promoting wound healing by manipulating caspase-3. Now that we have uncovered this novel non-apoptotic role of caspase-3, it should and must be taken into consideration in treatment strategies. Our lab’s preliminary and promising results indicate that inhibition of caspase-3 may be a highly efficacious means of treating advanced cancerous tumors,” said Assistant Professor Fuchs.

Assistant Professor Fuchs heads the Laboratory of Stem Cell Biology and Regenerative Medicine at the Faculty of Biology and is a researcher at the Lorry Lokey Interdisciplinary Center for Life Sciences and Engineering. His lab focuses on researching stem cells, which are responsible for tissue regeneration in our bodies. Within this framework, the lab isolates new stem cell populations, studies the mechanisms underlying stem cell apoptosis and promotes novel techniques for regenerative medicine and cancer therapy.

The study was supported by the Office of the Chief Scientist (KAMIN), RCDA, ICRF and GIF grants.