Glocalization: Spreading goodness in the world beyond their own communities

This week, Technion awarded Honorary Doctorates to nine admirable individuals as part of its annual Board of Governors meeting.

Meet this years Honorary Doctors through this series of video clips.

Technion President Prof. Peretz Lavie devoted his speech at the ceremony to the term “glocalization” – a merger of “globalization” and “localization.” He said that, “Today, we are here to celebrate what a glocal leader the Technion has become, shining its light and spreading its messages of futuristic science and technology for the betterment of the world, both across Israel and around the globe.” He thanked the honorees for their tremendous contribution: “Our honorary doctorates share the spirit of glocalization as each of them makes their unique contribution and creates their individual impact, extending beyond their own communities to spread goodness in the world. But they also share one more thing, for which we are so grateful, a love of Israel and of the Technion.”

Rabbi Lord Jonathan Sacks, an international religious leader, philosopher and author who has received numerous prizes and served as Chief Rabbi of the United Hebrew Congregations of the Commonwealth from 1991 to 2013, spoke on behalf of the honorary doctors. He said at the ceremony that, “It is a huge honor to receive an honorary doctorate from the institution that developed the drug for Parkinson’s, made breakthroughs in information technology, and spearheaded Iron Dome. Israel proves that it is possible to be 70, or almost 4,000 years old in the case of the Jewish people, and stay young, and part of the reason it stays young lies is the Technion itself. Technion is a living example of ‘tikkun olam,’ of mending a fractured world. And it does so by being at the very heart of Israel’s high-tech economy, Start-Up Nation. Every single technological development that Israel has developed, whether it be medical technology, nanotechnology, agricultural technology or information technology, has always been life-enhancing.”

View the booklet from the Honorary Doctorate Conferment Ceremony here.

Here are the recipients of the honorary doctorates from Technion for 2018:

Prof. Michael Aizenman is a paramount figure in the fields of mathematical physics, statistical mechanics, functional analysis and probability theory. His seminal contributions have shaped many of the most important developments in mathematical physics over the last 40 years. He is a professor of Mathematics and Physics at Princeton University. 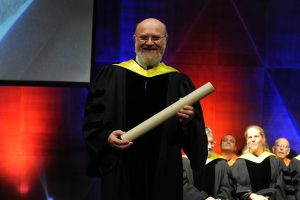 Prof. Stephen R. Forrest is an internationally-recognized expert in photonics and opto-electronics. He held several key positions at Princeton University and is currently on the faculty of the University of Michigan. He is responsible for several collaborative agreements between Michigan and Israeli universities, and is a distinguished visiting professor of the Viterbi Faculty of Electrical Engineering at Technion.

He received the honorary doctorate in recognition of his groundbreaking advances in organic optoelectronics, displays, lighting, optical communications and solar cells; in recognition of his scientific leadership; and in gratitude for his steadfast support of the Technion and the State of Israel. 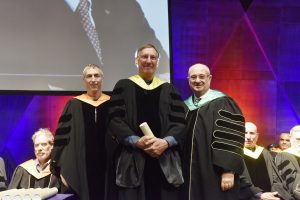 Prof. Klaus A. Mullen is an internationally recognized chemist specializing in polymer chemistry. In 1995, he designed the first nanographenes, a milestone that led to the development of many modern energy technologies. He served as director of the Max Planck Institute for Polymer Research from 1989 to 2016 and is an honorary member of the Israel Chemical Society.

He received the honorary doctorate in recognition of his significant contributions to the field of polymer-forming reactions and to the chemistry and physics of small molecules, graphene, dendrimers and biosynthetic hybrids; in appreciation for his wise and deliberative leadership; and in acknowledgment of his personal and professional accomplishments. 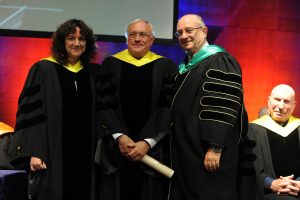 Dr. Andrew Goldenberg and Aviva Goldenberg are distinguished Technion alumni who live in Toronto, Canada. They are Technion Guardians – a title reserved for the most generous supporters. Dr. Goldenberg is an esteemed expert in the field of robotics whose career combined both academia and industry, and he is a professor emeritus of Mechanical and Industrial Engineering at the University of Toronto. Architect Aviva Goldenberg founded her own architectural firm and was a professor and program coordinator of Architectural Technology at Centennial College AAT.

They were recognized for their significant contributions in electrical and computer engineering and in the field of architecture; in tribute to their application of robotics to solutions for real-world problems and for their efforts to promote women in science and technology; and in gratitude for their profound dedication to the Technion, academia and the State of Israel. 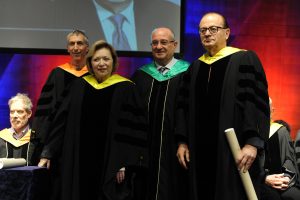 Dr. Jean-Yves Le Gall has been president of the French Space Agency since 2013. He is inter-ministerial coordinator for satellite navigation programs and chair of the Administrative Board of GSA, the European GNSS Agency, and president of the International Astronautical Federation (IAF). He is actively involved in boosting the ties between the space community in academia and in industry in France and in Israel.

He received the honorary doctorate in acknowledgement of his contributions to the promotion of space research in France, Europe and around the world; and in recognition of his support in strengthening the ties between the academic and industrial space communities in France and in Israel. 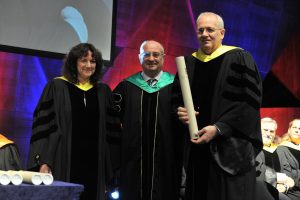 She was awarded an honorary doctorate in recognition of her exceptional commitment to international philanthropic causes; in gratitude for her profound dedication to the advancement of higher education in Israel; in admiration for her leadership of the Rothschild Foundation (Caesarea) and for her generous support of the Technion and the State of Israel. 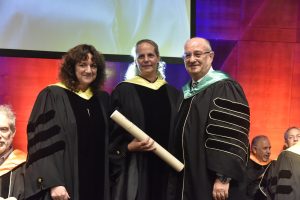 Rabbi Lord Jonathan Sacks is an international religious leader who served as Britain’s Chief Rabbi from 1991 to 2013. Rabbi Sacks has held a number of professorships, including at Yeshiva University and King’s College London. He is the author of several bestsellers, including Not in God’s Name: Confronting Religious Violence. In 2005, he was knighted by Her Majesty the Queen and in 2009 was made a Life Peer, taking his seat in the House of Lords.

He received the honorary doctorate in recognition of his lifetime contributions to maintaining Jewish traditional faith and enriching Jewish identity; in admiration of his position as an international religious leader and respected moral voice in the world; and in gratitude for his profound dedication to the State of Israel and the Jewish people. 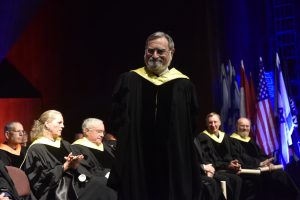 Dr. Robert J. Shillman (“Doctor Bob”) is Chairman of Cognex Corporation, the world’s leading supplier of machine vision systems. Doctor Bob founded Cognex in 1981 with his life’s savings of $86,000; its value is now nearly $10 billion. He received his bachelor’s degree from Northeastern University, and his Master’s and PhD from MIT.

He received the honorary doctorate in tribute to his professional accomplishments, inspired leadership and innovation as the head of an international company; in recognition of his decades-long commitment to the betterment of the Technion, Israel and the world at large; and in admiration for the vision and creativity that mark his commitment and his input. 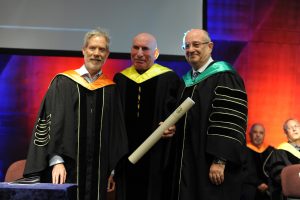