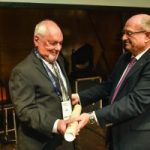 The President of Technion awards the certificate to Les Seskin

Les Seskin spoke on behalf of the Fellowship recipients, saying, “As an engineering graduate, I understand how stressful an engineering program can be, and that is why I applaud Technion services that contribute to a well-rounded and motivated graduate. Services such as student tutoring, counseling  and modern on-campus dorms. I have no doubt that my path would have been far smoother had it included even some of the amazing programs, facilities, and personnel that exist at the Technion. I take great joy and satisfaction in knowing that my support and work for the Technion will benefit great minds of future generations.” 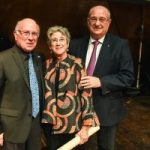 The President of Technion awards the certificate to Dr. Martin and Grace Rosman

The ceremony took place on the first day of Technion’s annual Board of Governors meeting. Prof. Marcelle Machluf, Dean of the Faculty of Biotechnology and Food Engineering, was the MC. Technion President Prof. Peretz Lavie said at the start of the ceremony: “I don’t know any university in the world that has filled such a central role in the life of the country and the nation. For us, this is a source of great joy and pride.” Prof. Lavie described Technion’s history prior to the founding of the State as well as in the last 70 years, and thanked the friends of Technion around the world, without whom Technion would not be able to position itself at the forefront of the world’s universities. 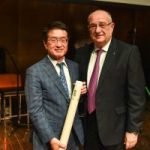 The President of Technion awards the certificate to Dr. Hiroshi Fujiwara

Dr. Hiroshi Fujiwara, who received the title of Honorary Fellow of Technion during the ceremony, opened his speech by blessing the State of Israel on the 70th anniversary of its founding, and asserted that, “Receiving this honor today at Technion moves me more than when I received my PhD degree from the University of Tokyo.” Exactly one year ago, during the 2017 Board of Governors meeting, Dr. Fujiwara announced the first Japanese contribution to Technion. As a result, the Fujiwara Research Center was founded, which aims to position Technion as a leader in the field of cyber. 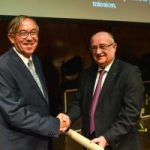 The President of Technion awards the certificate to Dr. Moshe Marom

Dr. Fujiwara is one of the most prominent figures in the field of Internet in Japan. He is the Chair, President and CEO of BroadBand Tower, a pioneer in the specialty Internet data center (iDC) business. In his speech, he said: “I dreamed of becoming an astrophysicist; I was attracted to Computer Science R&D, and these days I am an entrepreneur – and this too may change. Technion also changes constantly, in accordance with worldwide changes. The world is facing enormous new challenges, and I trust Technion to know how to properly contend with them and to continuously pursue Tikkun Olam.” 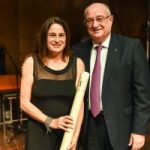 The President of Technion awards the certificate to Rona Ramon

During the ceremony, Technion’s new campaign to raise $1.8 billion by 2024 was announced. The funds will be used for improving research infrastructure and to recruit new faculty members in order to secure Technion’s standing as a global leader. The campaign was presented by Technion President Prof. Peretz Lavie, VP for External Relations and Resource Development Prof. Boaz Golany, President of the American Technion Society Zahava Bar-Nir and Technion alumnus Zohar Zisapel. The ceremony concluded with a performance by David Broza.