New technology developed at Technion is expected to significantly increase agricultural yields. This will be achieved using a nanometric transport platform, which until now was applied for medical purposes. 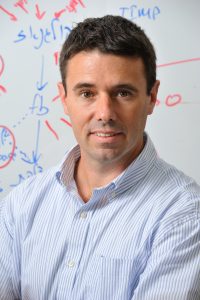 Technion researchers have developed a technology for delivering nutrients to plants which increases the penetration rate of nutrients into plants from 1 to approximately 33 percent. The technology exploits nanoscale delivery platforms which until now were used to transport drugs to specific targets in the patient’s body. The work was published in Scientific Reports and will be presented in Nature Press.

The use of the nanotechnology for targeted drug delivery has been the focus of research activity conducted at the Laboratory for Targeted Drug Delivery and Personalized Medicine Technologies at the Wolfson Faculty of Chemical Engineering. The present research repurposes this technology for agricultural use; and is being pursued by laboratory director Prof. Avi Schroeder and graduate student Avishai Karny.

The researchers loaded the nutrients into liposomes which are small spheres generated in the laboratory, comprised of a fatty outer layer enveloping the required nutrients. The particles are stable in the plant’s aqueous environment and can penetrate the cells. In addition, the Technion researchers can ‘program’ them to disintegrate and release the load at precisely the location and time of interest, namely, in the roots and leaves. Disintegration occurs in acidic environments or in response to an external signal, such as light waves or heat. The molecules comprising the particles are derived from soy plants and are therefore approved and safe for consumption by both humans and animals.

In the present experiment, the researchers used 100-nanometer liposomes to deliver the nutrients iron and magnesium into both young and adult tomato crops. They demonstrated that the liposomes, which were sprayed in the form of a solution onto the leaves, penetrated the leaves and reached other leaves and roots. Only when reaching the root cells did they disintegrate and release the nutrients. As said, the technology greatly increased the nutrient penetration rate.

In addition to demonstrating the effectivity of this approach as compared to the standard spray method, the researchers also assessed the regulatory limitations associated with the spread of volatile particles.

”Our engineered liposomes are only stable within a short spraying range of up to 2 meters,” explained Prof. Schroeder. “If they travel in the air beyond that distance, they break down into safe materials (phospholipids). We hope that the success of this study will expand the research and development of similar agricultural products, to increase the yield and quality of food crops.” 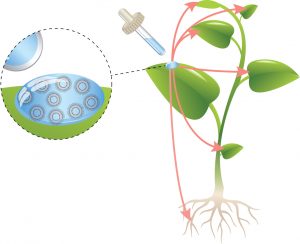 Each liposome (light blue bubble) was loaded with iron and magnesium particles. The liposomes sprayed on the leaves, penetrated and then spread throughout the various parts of the plant and released their load within the cells