HAIFA, ISRAEL (February 15, 2018) – Researchers at the Technion-Israel Institute of Technology have developed a nanotechnology that replaces the surgical scalpel with an “enzymatic blade.” In an article published recently in ACS Nano, the researchers describe the application of this technology in a surgical procedure in the oral cavity. The application spares the pain associated with orthodontic surgeries and significantly reduces tissue recovery time. 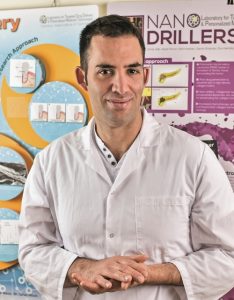 The study was led by Dr. Assaf Zinger, within the framework of his doctoral research, mentored by Assistant Professor Avi Schroeder, the director of the Laboratory of Targeted Drug Delivery and Personalized Medicine at the Wolfson Faculty of Chemical Engineering. The novel technology is based on rational use of enzymes – biological molecules the body uses to repair itself, as well as on use of nanoparticles for achieving a targeted therapeutic profile.

In the United States alone, approximately five million people undergo orthodontic treatment each year. To speed up treatment, which typically lasts about two years, many undergo invasive surgery, in which collagen fibers that connect the tooth to the underlying bone tissue are cut.

In a preclinical trial, the researchers compared the efficacy of the controlled-release system (in combination with braces), to that of standard orthodontic treatment and concluded that the system reduces the time required for straightening teeth and improving therapeutic outcome. This would translate to an orthodontic treatment in humans that lasts several months, instead of two years. The researchers estimate that it could be used in humans within a couple of years.

While the ACS Nano article presents a specific application of the “enzymatic blade” in the orthodontics field, the researchers emphasize that the new paradigm can be applied in a variety of surgical procedures. “Over thousands of years, the surgical knife has been upgraded, however, the general paradigm has not changed. Here, in the current study, we present a considerable paradigm shift: replacing the metal blade with a biological process.”

Also taking part in this research collaboration were physicians at the Sourasky Tel Aviv Medical Center Department of Pathology and the Rambam Medical Center Department of Oral Maxillofacial Surgery, and the director of the Moriah Animal Companion Center. The research was supported by grants from the European Council and European Union, German-Israeli Foundation for Scientific Research and Development, various Israeli foundations and Alon and Taub Fellowships.