Distinguished Professor Emeritus Jacob Ziv of Technion’s Viterbi Faculty of Electrical Engineering is the recipient of the 2017 EMET Prize in the category of Computer and Electronics Engineering. The prize is awarded annually under the auspices of the Prime Minister of Israel. The total amount, $1 million, is divided into five categories of excellence in influential academic or professional achievements that make a significant contribution to society. 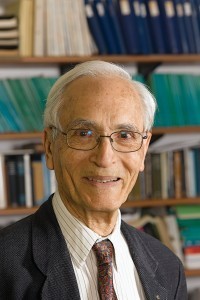 Ziv, born in 1931, completed his bachelor’s and master’s degrees in electrical engineering at Technion, followed by a doctorate at MIT (1962). After eight years of research and development – Rafael in Israel and Bell Labs in the US – he joined the Technion faculty. Over the years, he has won prestigious awards including the BBVA Frontiers of Knowledge Award, Israel Prize in the Exact Sciences, Israel Defense Prize (twice), Marconi International Award, IEEE Richard W. Hamming Medal, and Claude E. Shannon Award. He has held senior positions including Technion Vice President for Academic Affairs, Chairman of the Planning and Budgeting Committee of the Israeli Council for Higher Education, President of the Israel Academy of Sciences, and was a member of leading American and European societies.

He is being awarded the EMET Prize for his groundbreaking contributions to information and communication theory. The Ziv-Lempel algorithm, which he developed together with Prof. Abraham Lempel of Technion’s Faculty of Computer Science, is an algorithm for compressing information that enables lossless compression regardless of the structure of the data and without prior knowledge of its statistical properties. Many of the compression technologies currently used in memory devices, computers, and smartphones were developed based on this algorithm.

According to Ziv, “Computer and electronics engineering is a new category of the EMET Prize. I am very pleased that it has been added and I hope that in the future I will be joined by other winners from Technion.” He continues, “The training that we received at Technion in the exact sciences was excellent. Thanks to that training, I was able to lead the application of transistors at Rafael, a field that was unknown in Israel at the time. In computer and communication engineering research, it is customary to define the mathematical limits of future system performance. The next step is to get as close to these limits as possible by means of software and hardware. In the case of the Ziv-Lempel algorithm, we proved our hypothesis, and the algorithm has become a basic building block in many applications.”