Three students at the Technion have introduced the iFold Project – a robot that folds laundry. The robot was developed by Sapir Cohen, Noa Paz and Hila Levavi as part of an Arduino and IOT course at the Faculty of Computer Science. The course was led by: Itai Dabran; TAs Boris van Susin;Nitsan Pri-Hadash, Ariel Yehezkely Marina Minkin; and Dr. Nir Levy, academic relations director at Microsoft. 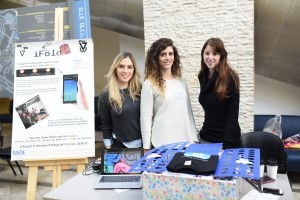 The project was presented this week as part of the annual project day held by the Department of Computer Science, which featured a range of student projects developed at the Faculty’s Systems and Software Development Lab.

“The algorithms that we developed lets users choose from various types of clothing to be folded and various folding methods, along with the option of receiving a reminder on their mobile phone,” explains Noa Paz.

The robot consists of three arms, three motors and plastic surfaces where the folding is carried out. A mobile application is used to define the type of clothing (pants, shirt, small towel). The three students note that the hardest part of developing the system was mechanical: “We have lots of experience with software, but coping with the mechanical challenges was complicated. We had to do a lot of experimentation and make many improvements.”

The Systems Programming in an Arduino Environment Course is held in conjunction with Microsoft R&D. It enables students to use technology and state-of-the-art software during their studies, including smartphones and tablets for running apps during the development phase.  The course  is designed to challenge the students with independent product-building projects and as such, the students designed smart systems that combine hardware and software using Arduino-based controllers.